The Space Cadet Jetpack was a neck item in Club Penguin, which was first made available during the Future Party, and designed as a futuristic version of the Jet Pack to be used by the Extra-Planetary Federation as the non-member equivalent to Robos. They were used by the Extra-Planetary Federation Agents to fly into space and stop universal threats. It could be used to blast off into space to destroy meteors and microbots to earn Meteor Points. 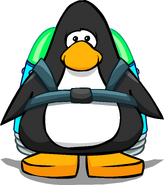 As seen in the Future Party Catalog

A penguin using it to blast off into space 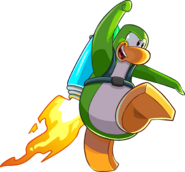 SWFEdit
Retrieved from "https://clubpenguin.fandom.com/wiki/Space_Cadet_Jetpack?oldid=1893975"
Community content is available under CC-BY-SA unless otherwise noted.