The Sports Party was a party based on sports and athletic events in Club Penguin, that took place during the summer of 2006.

The Ice Rink was the center of attention as it served a tri-purpose. Those who bought the face paint cheered on in the stands. Meanwhile, many member penguins bought sport items to play in the Ice Rink. Often, the room became full and many penguins battled out for the puck. Makeshift matches took place, and each time the puck entered the net, the score was added onto the scoreboards. Usually, the team with the highest score won. The blue and red teams distinguished themselves from each other using the face paint or corresponding colored clothing.

The Ice Rink was also home to many bugs, especially the malfunctioning scoreboards. Even after tons of goals, the scoreboards never added an extra number or even displayed an incorrect score. The puck was also sometimes found outside of the playing field, and therefore out of reach of the penguins. This fueled many protests to fix it, as Ice Hockey was unplayable for long amounts of times. The scoreboards were eventually removed, and were promised to return after the issues were fixed. However, none returned. 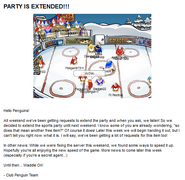 A blog post on the What's New Blog indicating that the party was extended, leading to the release of the Ice Skates