Not to be confused with The Penguin Mail stamps.

Stamps were special rewards released on July 26, 2010. Stamps were earned by playing games and working as a team with other penguins. There were 4 difficulty levels of stamps: Easy (green), Medium (yellow), Hard (blue) and Extreme (red). Some were for all players and some were only for members. There were 352 different stamps.

The Stamp Book was used to collect stamps. Each individual penguin had his/her own Stamp Book. Members were able to customize the cover of their Stamp Book, and were able to edit the color, highlight, pattern, and icon. Members were also able to display their favorite received stamps and pins on the cover, with a limit of 6 stamps and pins at one time. Stamp Books for other penguins could also be accessed, which allowed penguins to show off their stamps.

In the Stamp Book, the stamps were divided into 4 general sections. Some of these sections also had sub-sections. For example, in the "Games" section, there were sub-sections devoted to individual games. The "Events" section only had the Characters sub-section until the Party sub-section was released in August 2010.

In addition to stamps, pins were also collected in the Stamp Book. Using the Stamp Book, penguins could show off their pins to other penguins in Club Penguin. The pins are arranged in date of release (the time they are available). If you hover over them, you can also see when the pins were released and what they are called.

A Login Screen featuring the stamps

Another Login Screen featuring the stamps

Yet another Login Screen featuring the stamps

A preview of stamps from the What's New Blog

Stamp Book at the "Games" page before the updates

A penguin holding a stamp book, as seen on the Stamp Book postcard 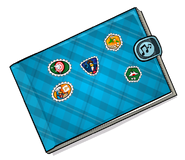 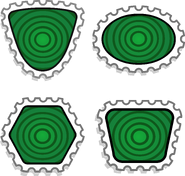 The bases for easy stamps 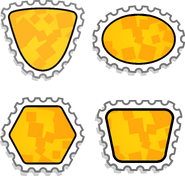 The bases for medium stamps 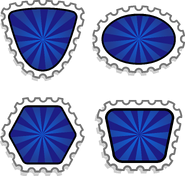 The bases for hard stamps 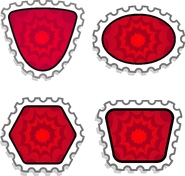 The bases for extreme stamps