In May 2012, a purple meteor was seen headed towards Club Penguin Island, eventually it crashed in the Dock where it gave some penguins super powers. 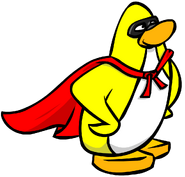 A Super Hero penguin found in a 2006-2007 image from Club Penguin. Note the old drawing style 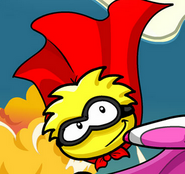 A super hero, as seen in an old Miniclip banner of Club Penguin