Super Hero Bounce is a minigame in Club Penguin that was available during the Marvel Super Hero Takeover 2013 and The Fair 2015. During the Marvel Takeover, it could be accessed from both the Super Hero Interface and the Beach, and was used for earning Power Crystals as a currency. During The Fair, it was accessible from the Galaxy Park, this time through an arcade machine, and could be used to earn tickets.

The higher and faster the player goes without falling, the larger the crystal boost is. If the player falls and manages to touch another crystal, the game won't be over, yet the crystal combo bonus would reset.

The game ends when the player hits a giant crystal in space, which marks the end of the game. If the player falls without touching any crystals, the friction with the air would heat the air below, until the player lands on the starting podium; then game is then over.

During the Marvel Super Hero Takeover 2013, the number of crystal points from each game was saved, and when reaching 50,000 crystals, the player could then obtain the Hero Hoodie. Smashing the giant space crystal rewarded the Super Hero Hoodie.

During The Fair 2015, the number of crystals earned in a single game, divided by 10; then rounded, was transferred into tickets (similarly to how coins are calculated in minigames). Smashing the giant space meteor gave 200 additional tickets.

Some areas can be seen in the background of the game. Penguintropolis and the Dojo Courtyard are seen on the lower parts of the background. Those areas disappear as the player gets further from the ground.

In higher altitudes, several objects, like a piano and hot air balloons, can be seen every once in a while. Plok can be seen as well.

Eventually, the player will reach space. After reaching the Dojo Courtyard, there will be a blimp and a hot air balloon.

A penguin in midair

A penguin falling back to the launch pad

A penguin landing on the launch pad 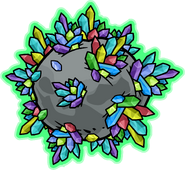 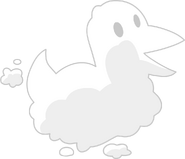 A Fluffy the Fish cloud 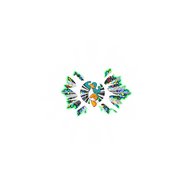 Crashing into the giant crystal

A sneak peek of the game 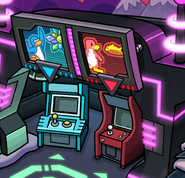 The arcade machines of Super Hero Bounce and Virtual World, during the 2015 Fair