Nearly all Swedish Chef sketches on The Muppet Show begin with him in a kitchen, waving some utensils while singing his signature yodel-esque song in his typical mock Swedish – a semi-comprehensible gibberish mimicking Swedish phonology and prosody. The song's lyrics vary slightly from one episode to the next, but always end with "Bork, bork, bork!" as the Chef throws the utensils (or whatever else may be in his hands) aside with a clatter that seems to startle him.

After this introduction, the Chef begins to prepare a recipe while giving a gibberish explanation of what he is doing. His commentary is spiced with the occasional English word to clue in the viewer to what he is attempting; for example, "Aweenda shmure da froog's legs" or "Yur puurt thuur chiir-ken airn der bewl". These hints are necessary as he frequently uses unorthodox culinary equipment (firearms, sports equipment, hand tools, etc.) to prepare his dishes. In the pilot episode of The Muppet Show, the Chef's commentary was supplemented by Chinese subtitles, but this was abandoned for all other episodes of the series. The sketch typically degenerates into a slapstick finale where the equipment or ingredients (usually a live chicken/goat/cow etc.) get the better of him.

Swedish Chef appears in the Day 4 act of the Muppets World Tour on March 23. He is stationed in France (the Beach). Swedish Chef teaches penguins to master the art of cooking. You equip the Salad Tongs and complete the performance, where Swedish Chef then gives you the Beret.

In #WaddleOn with The Muppets, Swedish Chef is a recurring character. He first meets up with Kermit and Fozzie in Germany while they are searching for the Golden Anvil thief. Then, he appears in Russia to tell the Muppets what Beaker had said, which surprisingly, proved helpful in the search. In the episode, he keeps repeating the words "Flinder minden, on der floopen stinzen." 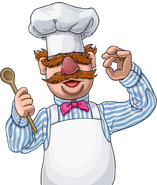 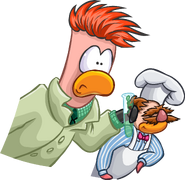 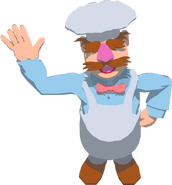