The Switchbox 3000 was one of many machines that Gary the Gadget Guy invented, and was located at the Stage. It was a grey rectangular box with various levers and buttons, with each one affecting the scenery of the play in some way. It was first introduced during the first Squidzoid vs Shadow Guy and Gamma Gal play and has been featured in almost all the plays after that.

Although each switch and button varies between plays, the large yellow lever on the side always makes the Keeper of the Stage appear somewhere on set. 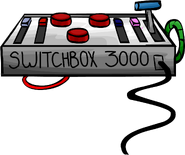 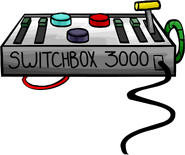 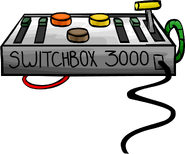 The alternate, newer style design
Add a photo to this gallery 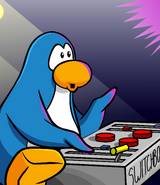 A penguin operating the Switchbox 3000, as seen on a Card-Jitsu Power Card

As seen in the animation for the "Medieval Party" power card 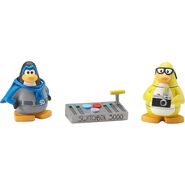 Retrieved from "https://clubpenguin.fandom.com/wiki/Switchbox_3000?oldid=1877992"
Community content is available under CC-BY-SA unless otherwise noted.