sys overrode two account requirements: it ignored the usual minimum of 4 characters in a player name, and it began with a lowercase letter (like Rsnail's account used to).

If the player tried to delete a postcard from sys, it would say "Are you sure you want to recycle this postcard from Club Penguin?" as if sys did not send it. 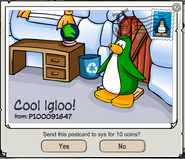 Sending a postcard to "sys"

sys under the alias of "Club Penguin"

Another postcard from sys
Add a photo to this gallery
Retrieved from "https://clubpenguin.fandom.com/wiki/Sys?oldid=1877997"
Community content is available under CC-BY-SA unless otherwise noted.