Tactical Pro was a medium difficulty stamp in Club Penguin. In order to obtain this stamp, the player had to destroy 100 robots without taking any damage in one level of System Defender. 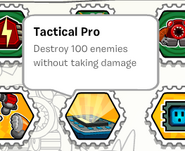 SWFEdit
Retrieved from "https://clubpenguin.fandom.com/wiki/Tactical_Pro_stamp?oldid=1878015"
Community content is available under CC-BY-SA unless otherwise noted.