Why do people do this stuff!? Someone wrote a Tour Guide card and wrote: the player puts on Tour Guide clothes and throws a hat at Puffle Roundup. The italicized is what I'm talking about! Please stop doing those 'mistakes'. --Alxeedo111 TALK OR... EAT BANANAS! PUFFA DUPPA! 12:39, 9 February 2009 (UTC)

Oh that happens to me sometimes.You have to wait until the other person quits (unless your cards come) then play again.It should come up in maybe to or three games.hotflameboy 07:15, 14 December 2008 (UTC) 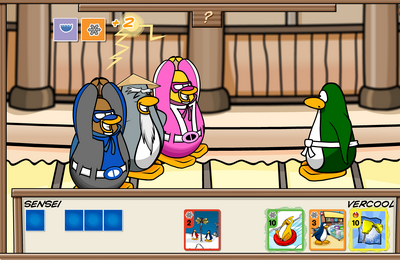 He says "Challenge" is spelled challange! 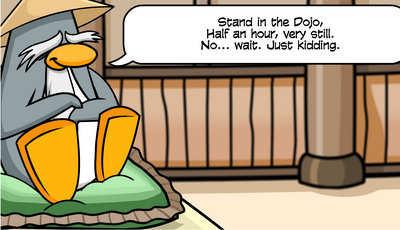 Yeah so, i just went to play card-jitsu...and it said the room was full....card-jitsu is a room??

Yeah that's weird. It wasn't like that before. probably a glitch

No cards showing up

I took off the

part in the article, since there is no proof to state this

I am a black belt now and I want to be a Ninja.When fighting Sensei I am suppose to treat him like he is a black belt player right?Mp44mp44 19 March 2009

Not the same thing

It did not took me 88 battles to get the black belt. It took me only one to get the white belt, actually If you talk to sensei and click: earn belts, you earn them faster

It doesn't feature any rules of the game, and it agitates me when I lose to people using 6 ice when I'm using 7 ice. There is no source of the rules, and it'd be awesome if this wiki had some.

Retrieved from "https://clubpenguin.fandom.com/wiki/Talk:Card-Jitsu?oldid=1727296"
Community content is available under CC-BY-SA unless otherwise noted.