Dear Moderator. Why do you have to pay to get all the cool stuff and to be a member. P.S can it be free because I cant pay for it.

at least make it so non-members have some good things because all you are doing is making parents pay for their kids to get clothes on a video game.

Any people who can edit this page please change the number four to five because there is five listed but it says four.

People who use hacking systems do not realise the importance for paying money, if more hacking continues Club Penguin would close down in just a few years.

What's that RSHQ it mentions?

I was looking round youtube and l@@k wut i found! 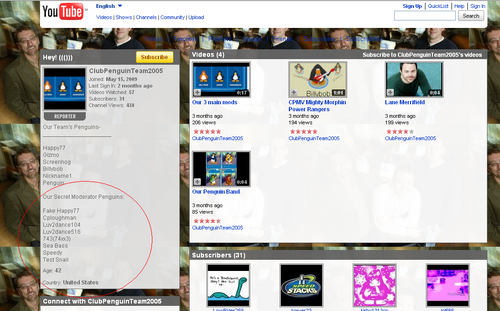 Our systems have tracked that the Moderators page has been violated. We must launch a re-edit attack on this page to prevent more violation!

The violation's gone. We are victorious. Thanks to Webj444 our community's save. Stay alert and post a message on this talk page for any violations. C-man out.

Guys, Billybob and most of the authors don't really moderate the game so the term moderating is misleading. Most of the real people who moderate the game are unknown since they have to keep their penguin identity a secret. I think you should consider creating a different section for their job titles such as Polo Field and Buisnesmoose under a Social Media Team and Whats new blog Authors.

Proof? Who wants a lovely picnic supper of fish and chips?

Of course, look at the evidence, do you ever see Polo Field and Businessmoose on Club Penguin all the time monitoring what you or other penguins are doing? no. They're most likely busy doing their SPECIFIC job which is social media, not moderating. Also on Screenhogs blog (http://screenhog.com/blog/club-penguin/) he specifically stated none of the main owners actually moderated the game. Yes they had the ability to ban but they were mostly doing their specific jobs. ~Boy cat 89~ 02:41, 27 October 2012 (UTC)

I know not all of them where bad... a lot of them pay a lot of their own time to help CP to be a good island! But some... just... used... the... benefits...of...being...a MOD!!!! (like saying <censored> you to the others, free membership, banning others coz he hated them and they have not broke the rule or he just feel like doing it!)

Also, I have a friend who told me that he is a mod(I was trying to report him but he said he wud ban me forever if I do!). And also the mod name Keerthirocks(or something like that LOL) I met him years ago and he shouted "I am a mod" And I notice that a lot of penguins are disappearing as he said "Who next?" "ahhhh...." something like that. Then he swear around to the other penguins, One of my friend was the "Chosen one". I hope this example will not affect the GOOD MODS! As long as I know that good mods are NEVER EVER telling others their identity! right?

Also, I understood about paying for membership stuff on CP, but I was wondering about a new feature, like Non-members can buy secret reveal items(viking helmet, silver surf board.etc.) AND penguins can buy membership from other penguins by CP MONEY.(think about this way, there will still be the same amount have membership being bought) Horse Isle 2, another game I played(which CP is a lot better after comparing) is using this feature. TELL ME IF YOU DO NOT UNDERSTOOD OR HAVE ANYTHING TO TALK OR CHAT WITH ME Thanks!

Trial Membership...What about poor people (or people who cannot get membership) just have membership for 7 days?? Isn't it good idea?

Retrieved from "https://clubpenguin.fandom.com/wiki/Talk:Club_Penguin_Staff?oldid=1657994"
Community content is available under CC-BY-SA unless otherwise noted.