The Tallest Mountain (also referred to as Mt. Tallest or the Highest Mountain) is located in the Mountain Range, and it is the highest point on Club Penguin. While the mountain's summit has only been made accessible once, it features prominently in the Mountain Range of Club Penguin Island, and appears in several PSA Secret Missions. It was a members-only party room when the Festival of Flight 2009 started, where it could only be accessed via the Hot Air Balloon Ride. It is so high that in the Case of the Missing Puffles mission, you need special equipment to climb it.

When informed at the Club Penguin Times, Gary said that the only solution to fix the windows of the Cave was to lift the entire island out of the water. However, it wasn't easy lifting over 1,000 tons into the air, so he created the Island Lifter 3000 and put it on the Tallest Mountain- because there wasn't enough space at any other location.

The base of the Tallest Mountain, seen in PSA Mission 1: Case Of The Missing Puffles

A view of the Tallest Mountain from PSA mission 1

The peak of the Tallest Mountain from PSA mission 1 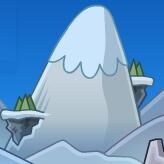 Retrieved from "https://clubpenguin.fandom.com/wiki/Tallest_Mountain?oldid=1921436"
Community content is available under CC-BY-SA unless otherwise noted.