Teams are rival groups of penguins in Hockey, Snowball fights, Soccer and other sports. The four teams are the Blue Team, the Red Team, the Green Team and the Yellow Team, of which costumes can be bought at the Stadium. Almost every sport costume at the Stadium has come in the colors red, blue, green, and yellow for the four teams. Red and Blue had a massive showdown at the 2008 Penguin Games.

Ever since the Clothing catalog released the Hockey Jerseys, the red and blue teams have been holding hockey games at the Ice Rink. The costume consists of either a red or blue hockey jersey, a hockey stick, the ice skates (given out at the sports party), and a hockey helmet. After the Penguin Games, the Ice Rink was replaced by the Stadium and hockey activity lessened. However, in the Christmas Party 2008, the rink returned and penguins started using it again until the soccer pitch struck back. On December 27, 2009, green team jerseys and goalie gear were available as hidden items in the Snow and Sports catalog. On September 24, 2010, yellow team jersey is available.

Red or blue team cheerleader penguins cheer on their teams during sporting events. They wear a red or blue cheerleader dress with red or blue pom-poms. Some cheerleaders wear wigs along with their outfit. The cheerleading outfits are currently available in the Snow and Sports catalog. Although the pom-poms are not in the catalog at the time, they did make an appearance during the play Team Blue's Rally Debut at the Stage. In the sequel to Team Blue's Rally Debut, male cheerleading outfits were released. On August 27, 2009, the Sport Shop started selling Green cheerleader uniforms. On September 24, 2010, the Sport Shop started selling Yellow cheerleader uniforms.

Red, blue, and green (hidden item) baseball uniforms are available at the Sport Shop, as well as baseball gloves and red, green, and blue baseball hats. Although there are no baseball diamonds in Club Penguin, members can construct them in their igloos. There are no baseball bat clothing items, but there are furniture baseball bats. There are also yellow and pink hats in the Clothes Shop, as well as purple and brown hats in the Treasure Book.

Red and Blue soccer penguin clothing came out in Spring 2008, in June 2009 they returned. Most soccer games take place at the Stadium, but some members build soccer fields in their igloos. Soccer cleats and a soccer ball item were released in the summer of 2008 and when just wearing the soccer ball(it still works if your wearing a soccer jersey and cleats) and dancing, the penguin would kick the soccer ball from each foot back and forth. The first major soccer tournament on the island was the Penguin Cup in June 2014, in which all four teams were in head-to-head competition, and got their own official names and bases.

In August 2008, red and blue track uniforms appeared in the Snow and Sports Catalog. Penguins could purchase track course pieces and build a course in their igloo. Track became a big event during the Penguin Games.

Dodge ball is a game that could be played in the Stage during Team Blue's Rally 2, where snowballs become dodge balls. Outside of The Stage dodge ball is played with plain snowballs. Although many penguin do not wear it while playing it, the official dodge ball costume is either the red or blue track jacket.

Although not a sport, some penguins dress up as referees during certain sports games (mainly hockey). The costume came out in the Snow and Sports catalog for November 2007 and later returned for the play, Team Blue's Rally 2. If you wave with this on, your penguin will hold up a sign saying GOAL on it in capital letters. Often, penguins will put on either the red or silver whistles, but when doing this they blow the whistle when they wave instead of holding up the sign.

To be a tennis player, a penguin must wear a Tennis Racket and either the new orange or pink tennis sports jersey. Badminton/Tennis nets can also be bought for 700 coins from the Snow and Sports catalog, as well as nets and a court for igloos. This sport does not feature red or blue colors as it is a two-person sport (4 person if its doubles).

During the Penguin Games, swimming contests were held in the underground pool.

In 2009, a hidden rock Climber suit was released alongside an igloo rock climbing wall. Now both items are no longer hidden. The suit only comes in one color.

During the Island Adventure Party 2011, there were two ships, members could access this area and go either to the Red Ship or the Yellow Ship, and step on a platform to shoot giant snowballs or throw snowballs in a loading tube for the cannon. The more snowballs shot from the cannons to the opposing teams' ship would result in the ship being "broken" (having holes in the ship and water spurting out.), but if penguins were using the hard hat to fix the "broken parts", the ship would return to its normal state. Also, in the Stadium Games, Team Yellow was officially introduced and competed against Teams Red, Green and Blue. 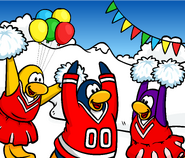 The Red Team cheering as seen in a Stamp Book photograph 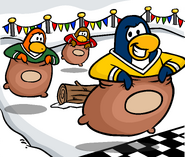 The Green, Red, and Yellow Teams competing in Java Jump as seen in a Stamp Book photograph 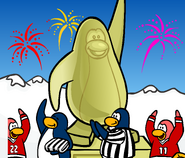