The Test Robots are mechanical, penguin-like machines invented by Gary the Gadget Guy. They were originally intended to help Gary test his more dangerous inventions but they ended up going haywire and escaping into the Mine Tunnels. A test robot has appeared in the Gadget Room for quite a few missions, but they didn't make a big appearance until the game Club Penguin: Elite Penguin Force was released. The Test Bots, along with the Ultimate Proto-Bot 10000, serve as the game's main antagonists. There are 3 Test Bots: Wheel Bot, Snow Bot, and Jet Bot.

Gary had decided to make some penguin-like robots to test his inventions with, they were made to test Gary's dangerous inventions. His plan worked but one day the robots went haywire and escaped. He then built the Robo-Tracker 3000 to track his robots with. It resembled a large backpack, with a vacuum strapped to it. The tracker led G to the Mine. He decided to go down the Mine Tunnels to find them, but accidentally crashed and found himself stuck under a Mine Cart and unable to remember what had happened.

A few days later, he was rescued and got his memory back, but the damage had already been done. The robots were running around Club Penguin, stealing important items such as the Boiler, the Ticket Booth, and other things. They tried to steal the vault door in the Gift shop, but the Elite Penguin Force Agents stopped them.

Soon all the robots were captured and deactivated. A celebration was held, but there was trouble ahead. All the HQ monitors had shut down, and both G and the Elite Puffles were missing. The Elite Agents tracked them down on a Snow Trekker which lead them to what the test robots had been working on all along, the Ultimate Proto-Bot.

It is rumored that Herbert has rebuilt all three test bots and that they are working with him. On February 5, 2011, Rookie put this message in the messages section of the spy phone: "Hey everyone! I have a theory- I think Herbert and Protobot may have helpers! Something with a tire... maybe some kind of evil wheel barrow?". This is a possible reference to the Wheel Bot. They were also rumored that they will have their own future level in the System Defender. This was later confirmed on February 10 when they actually did appear in the game.

Later, they are revamped into the Microbots to help with Protobot's takeover of the year 4014, during the Future Party. Robos piloted by Extra-Planetary Federation Agents help destroy them in outer space.

The Test Bots appear in the 3rd System Defender mission. Each Bot controls a certain bug.

Attempting to steal a computer from the Gift Shop Office 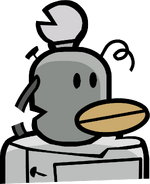 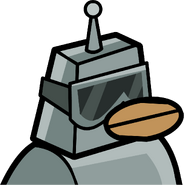 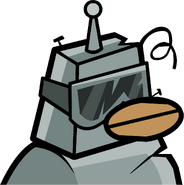 The Test Bots in the Gadget Room, after an attack from the Protobot