Not to be confused with the Daily Win Spin from Club Penguin Island.

The Daily Spin was a minigame that appeared during The Fair 2014 and The Fair 2015. It could be played once a day, allowing the player to win various prizes, those being items, tickets, or coins.

The game consists of a static wheel divided into 18 segments, each with an icon of a different prize. A rotating arrow is positioned in the center of the wheel. The player clicks and holds another arrow on the right of the screen, drags it downwards and then releases, in order to spin the inner arrow. When the wheel stops spinning, the player wins the prize the arrow lands at.

The note when you win a Silver Ticket

When you get a free spin and 50 tickets 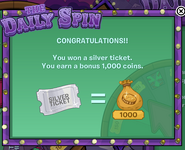 When a Member wins a Silver Ticket