The Factual Informative Spy Handbook (better known by its acronym: The F.I.S.H.) was the PSA handbook before it was merged with the Elite Gear catalog. The F.I.S.H. included instructions and Secret Agent gear, as well as some included secrets. It was somewhat of an essential item to all Secret Agents, and it was located at the bottom-right hand corner of the HQ, under the Mission Console. 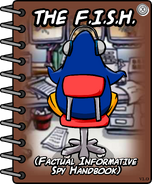 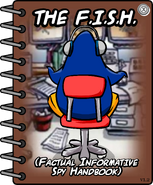 The penguin in the main page

The secret agent in the F.I.S.H.

The duties hidden in the F.I.S.H. 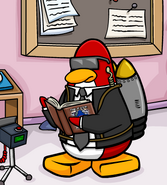 Jet Pack Guy while reading The F.I.S.H. in Mission 11