The Journey was the era in which Club Penguin has grown, evolved and improved over time. This includes its roots in Experimental Penguins, its update to Penguin Chat and Penguin Chat 3, the first two generations of Club Penguin (2005-2007, and 2007-2012), to Club Penguin's third generation (2012–2017).

The Journey included brand new puffles such as the Rainbow Puffle, Gold Puffle, and Puffle Creatures, the introduction to mobile device with Club Penguin App, the launch of CPNext, and plenty more updates.

Rooms with a * received minor updates after they were redesigned

The Town Center now has cobblestone underneath the snow. The Coffee Shop window is on the right side, and the Gift Shop and Night Club are now the Clothes Shop and Dance Club, respectively. There is a bench added next to the Coffee Shop and the chairs and tables have been changed too. In the exterior of the Dance Club there are speakers. In the corner of the town, there is a small area that could have been the rumored News Room.

A little bit of wood can be seen under the snow and the Ski Lodge now looks like a realistic cabin, the Everyday Phoning Facility is more like a working center in the outside and got much bigger. The Ski Lift was also updated. A conveyor can now also be seen next to the Ski Hill bringing tubes up to the top. The Ski Lift is also now operated by the belt used to repair it in PSA Mission 4.

They have obviously been given a completely new style. The forts are larger, and there is a Snow Puffle in the bottom right. With the smoothing of the forts, they lose the rough, realistic look that they used to have. Also, if you look closely, the plaque beside the Clock Tower has been removed.

Like the Town Center, the Plaza has its own cobblestone underneath the snow. Everything has been completely redrawn and now signs have been given to each room. The Pizza Parlor now has an awning, with a giant slice of pizza on top. The Stage's main shape remains the same, but there are now dramatic puffles above the 'Now Showing' area. The Mask in the top left is gone. The Pet Shop's exterior finally matches the interior after its redesign. There is a window with a Puffle Launcher sticking out. The top floor is a different color and shape, and has its own windows and tubes.

It has a new and modern feel to it, now if you notice on the right wall you will see a bunch of rare items. This definitely means that none of these items will be returning at all. There is now a raised section similar to the Coffee Shop, but it wraps around the room. There are now only two dressing rooms, and there is a runway in the non-elevated area. There is a hair/make-up area in the bottom left. It was also renamed the Clothes Shop.

Tables have been added, and it now resembles the Camp Penguin Dock from '07. If you also look very closely, you'll see that the box on the dock itself has been removed. If you look closely, again, you will see a frozen water fountain.

A dock has been added at the top left as well as the fact that it no longer resembles a beach as much as it used to. A bridge to the Dock has also been added. The dock in the Beach is probably for the Migrator, Rockhopper's ship. There are now rocks on the lighthouse side. In addition, the Ski Lift is much more prominent in the view of the Ski Hill.

Now it resembles a diner with a stage, kitchen, and more tables. It appears to also sell drinks after the update. The stage is much smaller, and the piano is no longer a grand piano. There are many more booths, and the Pizzatron can now be seen near the oven.

It has got a more "modern" look and it matches with the Arcade. It still plays the same music, but you can rarely hear it due to the mixes played by the SoundStudio. The Keeper of the Boiler Room was shifted to the middle-right speaker. The DJ Table and the stage are also increased and modified. It has also been renamed as the Dance Club. This room is basically a copy of the Make Your Mark: Ultimate Jam version of itself.

The Dojo got renovated completely. Sensei's cushion got moved to the center of the Dojo and Sensei now wears a black robe. The amulet on the ground is placed in front of Sensei and looks smaller but, unlike the past one in the Ninja Hideout, the stones will not glow. The entrances to the elemental dojo's are stationed in the pattern of the amulet: Fire on the left, Water on the north, and Snow on the right. The entrances also have two penguin statues beside them.

The Dojo Courtyard got completely renovated also. The ninja gate became a darker red and the video of Card-Jitsu Water was deleted. The floor appears to have become a darker gray. The puffle statues have little cracks on them to show how old the statues are. The volcano, waterfall, and the Snow Dojo mountain look more modern and now have bridges leading back to the Dojo. The Ninja Hideout was also removed.

The Mine Shack almost got renovated completely. The School replaced the Recycling Plant, a volleyball net and a picnic table were added, the Garden Patch is now on the bottom right. The Mine has moved up a bit along and the track is shorter. Herbert's statue was removed. It appears that there is a crane hanging from the shack, and there is a road leading to the Dojo Courtyard. There is now a road leading to the university, with a zebra crossing and a roundabout with benches on it. The Mine Shack is a lot more modern. There are also 2 fishes with hats on the School gate's sign.

The room got renovated completely, the huge fan above you is gone and it is more office like now. There are a bunch of monitors with Club Penguin wallpapers and the teleporter to the EPF Command Room was placed in the back of the room in the middle of a waterfall. There are massive telephones in the corners of the room.

The room got renovated completely. The surf hut turned into the surf shack that looks like a little serveing center. In the corner you will see a mini hospital possibly for injured penguins after they surf. The camp fire looks better and there is a box full of fish. They also changed where you surf. You have to get on the surfboard to start surfing. This room is technically a copy of the Teen Beach Movie Summer Jam version of itself.

The room almost got renovated completely. Now, the entrance from the Mine Shack is where the game Puffle Rescue used to be. In the lower right corner there is now an entrance to the Gold Mine, and the Cart Surfer game is in its usual place, but it is now shifted a little bit to the left. The cart's design was changed too.

The room got renovated completely, now there is a waterfall in the Forest and the entrance to the Hidden Lake is shiftted to the left, now you can see the Plaza and Mine Shack from the Forest, and the stairs have been given a completely new look.

The sign pole was removed, and tubes and the Toboggan were moved a little bit to the left. The signs showing the different sled runs now have diamonds, squares, and circles instead of their names. There are now stairs on the right side of the Hill going down to the Ski Village. The Grey Maintenance Shed has been removed. The Twin Mountains are now seen from the hill, as well as the Tour Guide Booth. A circular imprint has been added to the snow on one of the runs. The Ski Lodge now can be seen.

Now, the giant screen highlights the In-Game Missions, and there is now an on-site laboratory. The table got updated and was moved where the Tube Transport was along with the TV and chairs. Five surveillance security screens showing the Ski Village, Town Center, Plaza, Cove, and the Everyday Phoning Facility are added. The Spy Drills and System Defender games were moved to the left side of the room. The exit is on the right side. The agent clothes are there too. At the bottom left side is a jail. The jail has laser bars and a mini-satellite. There is also a computer that is playing Ice Blocks.

The Stadium had a major renovation, and, similar to the scoreboard at the Arcade, the Stadium finally had scoreboards that update in real time. The field was redesigned, and the teams competing also changed randomly. It shares a very similar look to the Penguin Cup version of itself.

Stinky cheese were added to the ship, along with barrels.

Many things were added to the Ski Lodge. The entire Lodge was turned into a base for expeditions, with a lot of wilderness gear added. A desk was added near the entrance, with a filing cabinet and computer. A door was added on the left side of the room, leading to the Wilderness. The center of the room had multiple reclining chairs and Find Four tables. The fireplace has been changed, now being much larger. The moose head and Fred's clock were also moved to the fireplace, replacing the mirror. The entrance to the Attic is now a spiral staircase.

The Attic was renovated heavily. The ladder to the Lodge has been replaced with a spiral staircase surrounding a tree, a table has been added with a map, chairs, and various supplies. The northern wall now has shelves with various artifacts from Club Penguin's history. The single window is now larger and puffle shaped. The floor is also partially raised, with the lower section containing a large rug, cushions and couches, as well as Find Four boards. Bulletin boards are hung on the walls, with pictures of various mysteries, including the Giant Squid. Below one of the boards is a small desk. 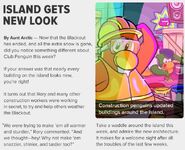 Old Lodge Attic
Add a photo to this gallery

New Lodge Attic
Add a photo to this gallery

Club Penguin New Horizons Part 1 - A Brief History of Club Penguin
Add a photo to this gallery
Retrieved from "https://clubpenguin.fandom.com/wiki/The_Journey?oldid=1895324"
Community content is available under CC-BY-SA unless otherwise noted.