The Penguins that Time Forgot was a Stage play in Club Penguin. It first premiered in June 2008 and since then had four encores.

Chester is a curious penguin with an eye for a bargain. One day, he meets a penguin that offers him an invention—a time machine consisting of a box and 'special hat'. Chester takes the cobbly creation back to his igloo and steps into the box. The rest is, as they say, prehistory...

The Stage during the play's first showing 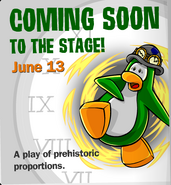