The Sea Caves is a zone in Club Penguin Island. It is a system of underwater caverns below the sea, filled with crystals, treasure, and ancient ruins, and inhabited by many aquatic creatures, such as fish, clams, squids, and crabs. The deepest part of the caves are volcanic.

The Sea Caves was one of the original three zones in Club Penguin Island. In the 1.0.1 update, the lighting of players in the zone changed, and players since appear darker.

In the 1.2.0 update, a stone sign displaying emojis that correspond to air bubble levels was added to the entrance directly below the water's surface. Additionally, multiple parallel facing air vents were added to areas of the caves where air does not deplete, such as Glow Grotto.

In the 1.4.0 update, player lighting was changed again.

The caves utilize an air mechanic. While underwater, players have a large bubble of air surrounding them. Except for certain sections of the cave, air slowly depletes over time, and the air bubble shrinks. If the bubble ever runs out of air which occurs after roughly one minute without being refilled, the player loses their breath and automatically resurfaces (players can also manually resurface at any time). Air can be refilled at any time by entering certain areas or coming into contact with bubbles stationed at various points around the caves.

The entrance is the only place in the caves above sea level. In the center, there is a small pool of water, which leads down into the main caves. There is a large staircase made of rock that spirals around the entrance, and ends in a ledge with a springboard, which players can use to launch themselves into the water. Additionally, there are some broken parts of a ship protruding out of the rocks. The exit, which leads to the Coconut Cove, is under the stairs.

Below the entrance is a circular cavern with large ruins. Below leads down further into the cave, and in the left of the area there is an entrance to the race course. There are also a few seashell chairs that players can sit in.

As of the 1.2.0 update, a stone sign displaying four emojis was added right below the water's surface, which corresponds to the four colors (green, white, orange, and red) air bubbles display depending on how much air the player has.

The race course wraps around the side of the northern central area. Here, players can try and complete the race as fast as they can. After crossing the starting line, the player is timed, and air bubbles with checkered patterns must be collected to complete the race. The race however is littered with hazards, such as squids and cacti, which cause the player to bounce off them when touched, and venus fly traps, which can eat a nearby player and spit them out a few seconds later. After the player reaches the finish line, a scoreboard shows the time it took them to complete the race in seconds and milliseconds (up to two digits each). If the player did not collect all checkered bubbles along the way, the time is not displayed.

The lower central area has the largest amount of open space in the caves, and connects to all other areas except the entrance and race course. On the left side, there are paths leading back above, to the Party Sub, Glow Grotto, and Crab Den. On the right side, there are many hazardous creatures, including two rings of sea urchins, squids, and venus fly traps, as well as a path to the Throne Room.

The Party Submarine (or Party Sub for short), west of the central area, is a damaged submarine outfitted with interactive disco ball, lights, and confetti blaster, located in a small cave. The sub plays five different songs, which change every few minutes. Large parts of the sub are torn off, such as the back end, propeller, and some lights. Some parts are nearby, but others are completely missing. While in the cave containing the sub, air does not deplete.

According to loading screen messages, "some say" a "brilliant penguin" built the sub and that it may still hold top secret information.

The Throne Room, east of the central area, is a small cave in an underwater air pocket. There is not much in the throne room beyond a large throne and large crystals growing on the ground and walls, and also some stalactites and stalagmites that form what resembles a jail cell. A long tunnel connects the room to the central areas, which is adorned with multiple arches.

The Glow Grotto, south of central area, is a small cave deep underwater, which most notably houses the Deep Sea Shop. Here there are many exotic corals, fish, and a large oyster visible in the distance. There are also a few chairs that can be sat in. While in the grotto, air does not deplete. The tunnel that connects the room up to the central area is adorned with cacti.

The Crab Den, southwest of the central area, is a winding tunnel inhabited by many crabs. The path is littered with wooden wreckage, and curves around multiple times. The lower parts of the tunnel are right above an underwater volcano, which has multiple vents that blast steam periodically which can impede progress. At the very end of the tunnel is the den itself, which is filled with treasure. Air does not deplete here. Below the pile of treasure is a tube, which provides a quick exit back up to the central area, but it only works one way, and cannot be used to get back down.

Main article: Daily Challenges
The following zone-specific challenges can be completed here. Challenges with a dark gray background are currently unused, and do not appear in the game. 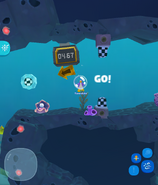 The starting line of the Race Course 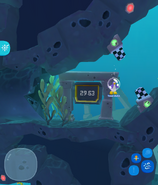 The finish line of the Race Course 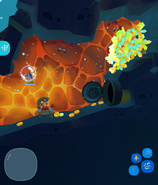 End of Crab Den
Add a photo to this gallery

The zone's icon on the map

A pair of air vents, added to various areas in the 1.2.0 update 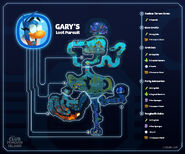 Retrieved from "https://clubpenguin.fandom.com/wiki/The_Sea_Caves?oldid=1891713"
Community content is available under CC-BY-SA unless otherwise noted.