The Stage is a large theater located in the Plaza, between the Pet Shop and the Pizza Parlor. It is the only room that updates actively. On the Ground Floor are twenty chairs for a penguin audience to view theatrical acting. In the center of the chairs is the Switchbox 3000, which controls changes on the stage such as the background, special effects, etc... There are also two box seats on the second story, which both have two seats. The box seats are accessible by waddling left or right on the stage. Below the stage is a small orchestra pit with four music stands, a piano and a piano bench. The Stage also has a catalog called the Costume Trunk. In this, you can buy costumes for the current play. If you want to join in on the acting, you can open The Script and click on phrases for penguins to say. The Stage was launched on November 16, 2007. The artistic feature of the stage attracted the Yellow Puffle. Sometimes, a play that went on before will come back as an encore.

On the left was a distant planet called Planet X, which had a UFO.

On the right was the inside of a high-tech interplanetary transportation vehicle; it had lots of Televisions which when clicked changed channel.

Also, the lights moved where you dragged them.

In Order of Appearance:

Captain: "The planet appears to be made of metal!"

Alien: "Take me to your bird-feeder!"

Ensign: "You should join us, alien... We would love to have you at Club Penguin!"

Captain: "Then we shall use the metal to fix the ship!"

Alien: "Let us voyage together as a team!"

Captain: Engage the carp drive... Let's get back to Club Penguin with our new friend!

On the left is a beach, which has a boat with fishing rods in it. On the right is a garden, it has a balcony. The Twelfth Fish is influenced by Shakespeare-written plays, especially The Twelfth Night.

There are things to do with the scene which when clicked change. This is the list:

"For what is best, that best I wish in thee."

"We crew, we happy crew, we land of penguins."

This is a Club Penguin version of a superhero story. This play won the award for the best costume in the Penguin Play Awards 2010.

The set depicts is a modern cityscape with many tall buildings, billboards and a lake with trees around it.

(Squidzoid turns into a penguin)

Team Blue's Rally Debut was about a contest between three mascots to see who wold make the best Team Blue mascot.

(Tate runs into the gym)

(Tate trips and falls again, runs out of the gym)

The Quest for the Golden Puffle is influenced by the Indiana Jones movie series. This play won the award for the best sound, effects, set, and overall Play in the Penguin Play Awards 2009 and 2010.

The set looks like a jungle and then turns into Egypt and then it goes inside a pyramid.

This is about a time-traveler accidentally getting into the past but cannot get back because the time machine broke. This is a story that tells us a moral: Do not trust or buy cheap things (the time travel machine; a box and 'special hat') because they are easy to break. It seems to be heavily based on The Flintstones.

It is a town with 3 stores (Grub, ClubClub and Stuff) near the volcano. It is believed to be the copy-like of the Town (Grub [food and drinks] is the Coffee Shop, ClubClub is the Dance Club, Stuff is the Gift Shop.) Beside the shop 'Grub' is box (written 'Time Travel 1000'). There is a dinosaur beside it and near to the audience there is a flat grassland.

Team Blue's dodgeball players have their uniforms ready, and their cheerleaders are set to win the crowd's support for the big championship match. There's just one little problem.... two members of the Blue Crew mascots went to the wrong gym!

Now Zeus (the penguin dressed up like a moose) is left to support his team by himself. What will happen when he meets the Team Red mascot for the first time? Find out in...Team Blue's Rally 2!

Ruby and the Ruby

This play is a mystery story about a 'stolen' ruby. It is unique in the way that it has a hidden background, a hidden pin (which you can get by following the clues in the Script) and a secret playbill in the Penguin Times (which you can see if you click the right things).

Ruby and the Ruby

The sequel to Space Adventure. It involves the original characters, plus some new aliens. From the last lines in the script it looks like there will be another sequel.

Redhood throws a snowball at Grumpunzel

THE END
Twee Gives A Tour Of The Stage

The third time the penguins get ready for the match with Blue VS. Red. Like all the other Team Blue Rallies, there is no Switchbox 3000 present in this play.

The first Penguin Play Awards. Five plays were nominated and famous penguins could sometimes be found Backstage on different servers, including Aunt Arctic.

Host: And the winner for Best Overall Play is...

Host: Wow! The award for Best Costume goes to...

Host: This year, Best effects will be awarded to...

Host: The judges congratulate all the nominees!

Host: You, large squid monster in the back! Settle!

Host: Excuse me! Lady in red! You missing a jewel?

Host: Yo! Bring over that that Shadow Wave!

Host: Hey - everyone quiet down!

Host: What happens if the MONSTER doesn't win?!

Host: Everyone looks so absoulutley fabulous.

Host: I'm excited to see the winners on stage.

Alaska: Was told there'd be some rare puffles. Seen any?

Chester: If I had a time machine, I'd stay here. You?

Ruby: This trophy will look great next to my ruby!

Hammer: The judges need to look at the nominees carefully...

Gamma Gal: Wouldn't be where I am now without bad dudes.

Twee: Aren't my wings the sparkliest you ever seen?

Flippers: Did you hear about the A,B ,Seas? Get it!

Lobster: You've had enough time on the Stage! MOVE ALONG!

Chester: Okay now. Give me TIME to talk. Heheheh...

Alaska: An honor to be here. Next adventure, please.

Boris: GIVE ME THE TROOOOOOPHY!

Shadow Guy: I'd like to thank my fans. And my Shadow Wave.

Host: Thank you! You've been a great audience!

Audience: Genius! This event is the best!

Audience: I get tired listening to boring speeches.

Audience: Let's all dress as lobsters and clap our claws!

Audience: Everybody on your chairs! ENCORE!

Audience: How loud can we get? Everybody CHEER!

Haunting of the Viking Opera

Hector: Alright everyone, it's time for Helga's solo. From the top!

Helga: NO! NO! A bajillion times NO! I will not sing!

Hector: Come on Helga! Your solo's the most important part of the play!

Helga: NO! As long as the ghost is ghosting, I will not sing!

Hector: Helga, please! There's no such thing as ghosts!

Helga: Oh, but what if the ghost throws a tomato or something?

Bailey: No worries. I'll 'appily take a tomato for you any day.

(Everyone takes in their places.)

Hector: Oh my goodness! The ghost is real?!

Helga: Don't just stand there, do something!

Bailey: Well, I ain't afraid of no ghost! Let me 'andle this!

Bailey: You there! You're under arrest! Haunting is against the law!

Bailey: On second thought, maybe I'll let you off with a warning...

Hector: Maybe if we ask nicely, it'll go haunt the mine or something...

Bailey: BLIMEY! I CAN'T EVEN HEAR MYSELF THINK!

(There's a rumble and suddenly...)

(...a giant avalanche buries the ghost.)

Helga: Now THAT'S how you sing an opera.

Hector: I guess it's not over until the hat-lady sings!

Bailey: Alright, now let's see who's really behind the ghost!

Hector: Why it's Moneek, our costume designer!

Hector: What were you doing in that sheet?

Moneek: Sorry, I got tangled in that sheet with my flashlight.

Helga: Then why were you yelling 'OOOOooooOOOO!!!'

Moneek: Oh, it was too bright. It was hurting my eyes.

Bailey: Well, I'm glad we got all that cleared up!

Helga: And I finally got a chance to practice my solo!

Hector: Good show everyone. Let's take it from the top!

Haunting of the Viking Opera

Secrets of the Bamboo Forest

Monkey King: The Treasure is so close! In that palace!

Monkey King: Yes! Do you know how to cross this river?

Funny Pig: There is a magic bridge!

Funny Pig: First we must find the Golden Feather.

Monkey King: Is it close by?

Funny Pig: It's hidden in a place of light far away.

Funny Pig: Maybe there will be some snacks along the way!

Monkey King: We return with the feather!

Funny Pig: And I found a Pizza! Candy topping!

Guardian Dog: Monkey, this is not your place to be.

Monkey King: But I'm not a Monkey. I'm the monkey KING!

Guardian Dog: You must prove yourself worthy to enter.

Monkey King: But of course. Hey... did you want some snacks?

Guardian Dog: Snacks? No! The feather is your key.

Guardian Dog: If you found the feather, you may enter.

Monkey King: Phoenix Queen! It has been a long journey!

Phoenix Queen: You are brave and clever!

Phoenix Queen: I award you this very rare background.

Phoenix Queen: Alright. Just be sure not to gobble it.

Monkey King: I have enjoyed my adventure.

Phoenix Queen: Then you shall have more.

Director: To enter the palace you need the Golden Feather.

Director: Let's take it from the top! 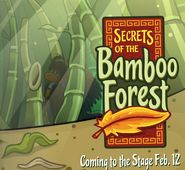 A penguin hidden in the Bamboo Forest.

A picture from the Newspaper.
Stagebambooforest.png
The Stage.
Add a photo to this gallery

Retrieved from "https://clubpenguin.fandom.com/wiki/Stage?oldid=433896"
Community content is available under CC-BY-SA unless otherwise noted.