Tommy is a light blue penguin who wears a Tuba. He is known for launching snowballs at an extremely long distance.

In one of the comics, Tommy and two other unnamed penguins are having a Snowball Fight, in which Tommy uses his tuba to launch a snowball a great distance. 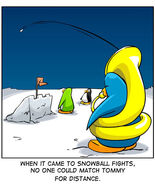 Tommy in the comic Going for Distance
Community content is available under CC-BY-SA unless otherwise noted.
Advertisement