The Town Center (or simply known as the Town) was the main gathering area in Club Penguin, where many penguins chatted, and advertised parties at their igloos. The Town was usually the first area that penguins entered after logging on, unless there were one hundred penguins already in the Town, in which case they would enter a different area.

The Town had no games, but it was an easy way to access rooms including the Coffee Shop, Night Club, Clothes Shop, Dock, and the Snow Forts. It was almost always decorated for parties and events. Along with the Plaza, the Town was the busiest room in Club Penguin.

The Town Center as seen on episodes of The Spoiler Alert

The Town Center as seen in Club Penguin: Game Day! 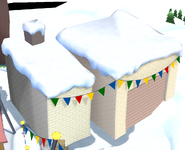 The two mysterious buildings behind and beside the Coffee Shop as seen on the mini-game Bean Balance from Club Penguin: Game Day! These buildings can also be seen in a 2010 postcard.