The TraceTracker 3000 was a feature on the EPF Phone that came with the upgrade on April 5, 2013. It allowed the player to view the "trace" of certain things by using clues or DNA samples. Only members could use it.

The gadget required two clues from the item you are looking for in order to work. Once you find those it would emit a green circle and you could see the target's footsteps (or where their body had touched, as Herbert's DNA was shown in the shape of an angel on the ground). 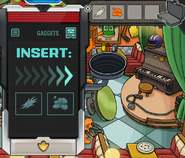 The trace tracker in use
Add a photo to this gallery

Retrieved from "https://clubpenguin.fandom.com/wiki/TraceTracker_3000?oldid=1878794"
Community content is available under CC-BY-SA unless otherwise noted.