Turbo Battle was a hard difficulty stamp in Club Penguin, only available to be obtained by members. In order to obtain it, you must defeat a crab boss in Puffle Launch, in turbo mode, which can be unlocked by completing all 36 levels in a combined total of less than 18 minutes. 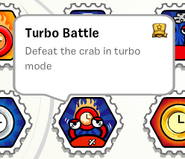 SWFEdit
Retrieved from "https://clubpenguin.fandom.com/wiki/Turbo_Battle_stamp?oldid=1878881"
Community content is available under CC-BY-SA unless otherwise noted.