Turbo Master was an extreme difficulty stamp in Club Penguin, only available to be obtained by members. In order to obtain it, you must complete all levels in Puffle Launch in turbo mode, which can be unlocked by completing all 36 levels in a combined total of less than 18 minutes. 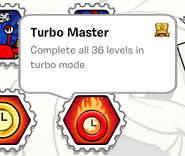 Retrieved from "https://clubpenguin.fandom.com/wiki/Turbo_Master_stamp?oldid=1913835"
Community content is available under CC-BY-SA unless otherwise noted.