The Turbo Race 3000 was an event that allowed players to test drive go-karts at the Stadium. It occurred from July 31 to August 7, 2014. It was first announced in issue 457 of the Club Penguin Times. 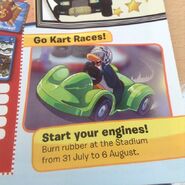 The announcement from the Club Penguin Magazine

The Stadium during the event
Add a photo to this gallery

Retrieved from "https://clubpenguin.fandom.com/wiki/Turbo_Race_3000?oldid=1906481"
Community content is available under CC-BY-SA unless otherwise noted.