Tusk, also known as the Master of Snow, is a walrus and the primary antagonist at the Card-Jitsu Party 2013, the true antagonist behind Card-Jitsu Snow, and the leader of the Snow Minions. He is the one who sent Scrap, Sly, and Tank out to defeat Sensei and destroy the Dojo. Tusk seems to have hatred for Sensei and his Ninjas. He used to train in the art of Card-Jitsu with Sensei, his childhood best friend, but Tusk turned on Sensei out of jealousy. Players could battle in his lair after receiving the Snow Gem.

"How long can you last against my Snow Minions?!"

Tusk was trapped beneath the snow for years and trained to become the supreme master of Snow. He is Sensei's one-time childhood friend, now ultimate enemy, and seeks revenge and recognition as the most powerful ninja.

Why you should meet him: To defeat him in battle and bring balance to the elements.

Where you might find him: Ninjas who wish to help defeat Tusk must first speak to Sensei at the Dojo and learn the ways of the ninja.

When Sensei was a young boy who had not yet learned Card-Jitsu, he used to play with Tusk. They sang and had snow ball fights and seemed to be good friends. One day, when Tusk made some lumps of snow clumped together, Sensei made a detailed snow statue of the future dojo. Tusk seemed jealous and a little bit bitter at this.

Then the pair went to train to master the elements together. They dreamed of standing side by side, leading and training an army of ninja penguins. He and Sensei were friends, but their relationship had a competitive side as Tusk could not master the delicate moves of Sensei. One day, they chose to have a battle on a snowy cliff, where the future Snow Dojo would be years later. Tusk instigated it by throwing a snowball at Sensei, who threw Tusk against a wall with snow. Tusk used his power to create an enormous snowball, displaying his true power over snow. He threw it at Sensei, but once it hit him, Sensei sent it back. The force against the wall caused an avalanche, in which Tusk was buried and trapped in a cave in the side of a mountain. Sensei looked for him, but found only a piece of his tusk, departing sadly, and vowed to teach Card-Jitsu to penguins so they could use the elements wisely. Tusk presumed Sensei had left, not caring for him, and turned bitter and cold. He sadly sat buried in the snow, then began to dig himself out.

For years, Tusk plotted, making the snowy cave his lair. He made armor and a torn cape for himself to look intimidating, became the leader of the Snowman army, obsessed with avenging his defeat. He vowed that he would master Card-Jitsu Snow, and that he would get revenge. In May 2013, Tusk sent the 3 Snow Minions, Tank, Scrap and Sly to attack and take revenge on Sensei, but Sensei and the Ninjas withstood the attack, in the game Card-Jitsu Snow. As a final challenge, the ninjas stand up to Tusk alongside Sensei, in Tusk's lair, in a battle that would determine the fate of the island. However, after a strong battle, Sensei and his ninjas defeat Tusk. Tusk laughs evilly, saying that their Sensei had taught them well, but he has more power than all of them. Turning into a shadowy spirit, he disappears, his face showing for a few seconds.

Tusk has a pattern to his attacks when players are battling him in Card-Jitsu Snow. He has three different moves which are:

His attacks can be delayed by a Fire Power Card attack, however.

He does not use the Snow Wall to push all ninjas back to the far left side of the grid very often.

All his attacks deal 10 damage each to ninjas.

Tusk, Sensei and a Fire Ninja at the beginning of the Tusk battle

Tusk in battle with Sensei about to use a power card

Tusk in the My Penguin app

Young Tusk and Sensei in the newspaper 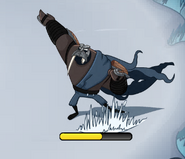 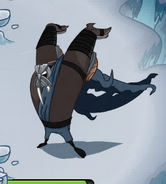 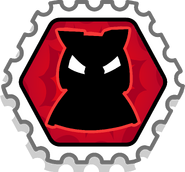 A silhouette of Tusk 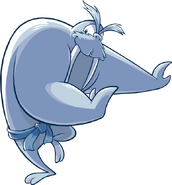 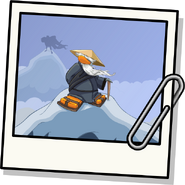 Tusk with Sensei in the Club Penguin Times