Tusk's Cave was a lair where Sensei and the Ninjas battled Tusk in Card-Jitsu Snow. It was accessed after you received your Snow Gem. It was found on the side of the cliff the Snow Dojo was located.

There was a glitch for some users where the cave could only be entered at the bottom right side. You had to stand below the cave and click on the larger part of the odd rock with two heights:

Sensei and Tusk inside Tusk's Cave 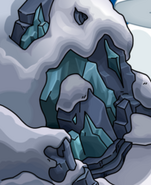 Retrieved from "https://clubpenguin.fandom.com/wiki/Tusk%27s_Cave?oldid=1912144"
Community content is available under CC-BY-SA unless otherwise noted.