The Umbrella Hat was a head item in Club Penguin. It was released during the Water Party 2007 and was found in the Coffee Shop. It could also have been obtained via Puffle Digging. 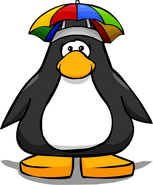 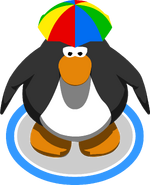 As seen in the animation for the "WATER PARTY" power card, along with the Water Wings, Green Duck, and Yellow Flippers

SWFEdit
Retrieved from "https://clubpenguin.fandom.com/wiki/Umbrella_Hat?oldid=1906486"
Community content is available under CC-BY-SA unless otherwise noted.