The Underwater Adventure was a stage play in Club Penguin. It first premiered at the Stage in August 2009 and has had 3 encores since then.

Daring Daisy and Fearless Fiesel are on a mission into depths of the ocean to search for treasure. But meeting the Mystic Fish leads them to a far greater discovery...

The Stage during its first and second showings

The Stage during the third and fourth showings 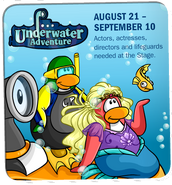