Oh god why. Why did I ever play this? Jesus Christ

August 8th 2013 --- I have quit Club Penguin. It got really awful and I quit officially in July 2009. Do not attempt to bring me back. I quit for good. Auf wiedersehen

P.S. I brought back an old revision of my page from early 2008. Goodbye, my friends.

Update: I have a new wikia account. I'm half-back. I no longer play Club Penguin, but let me know if you would like to attempt to contact me through a different medium, such as Steam or ROBLOX. By the way, is Barkjon still around?

April 26, 2012 - Wow, this brings back memories. I've long since realized how sh*tty Club Penguin has become and the cash cow it is. ROBLOX is no better, I realized, and I officially quit ROBLOX February 8, 2012.

I am a penguin who has been on the island for over 100 days. On my island, I was known to be sailing off to other islands. But one day, sometime in late September 2007, my ship, The Swift Sponge, hit an iceberg and had to abandon my ship. I was sailing to Club penguin Island to give free stuff and collect stuff for my island. When I came, I took my map of Club Penguin. I swam to an iceberg. I saw many penguins on it. One penguin said, "Welcome to Club Penguin Island.". I replied "I made it!". Now, I sometimes sail back to my island on my new ship, The CP Wonder. Once, on a journey to get ice chunks, I stopped next to the Migrator. I warned Rockhopper to watch out for icebergs ahead. Sadly, one iceberg was to fast and hit the Migrator. Currently, I am awaiting training to become a ninja. --6spongey98 08:31, 2 January 2008 (UTC)

Wow, 75 jobs for one penguin to do, SOOOOOOOOOOOO busy!!! I normally have free time so look for me on Mammoth,Frostbite,Half Pipe, or Tundra! -6spongey98

Notes from the desk of 6spongey98

Barkjon ,User:Polo890,and Fluffin Stuf: Do you know who they are? I have other penguins on it, but I guess I am too lazy to do that!

I have a band. It is currently under development, so ONE person can enter as drummer. Here are the current members :)

Content Deleted <--- That may have been a message for me about the whereabouts of evil.

Listen up, I may be his first puffle, but I am modest about it. I don't brag about it to the other puffles, though spongey does feed and bathe me first, it's cool to be the first puffle. I am sorta wondering about what happened to his older puffles.....

I guess I am very happy at times, I do like the April Fools Part 2008! It's my favorite kind!!! I do admit I am sort of jealous of Shadow, he got to pick his spot in the igloo for his bed. The others didn't get to pick! I should have picked the skateboard........flames are cool........sigh.

I am the most loyal to Spongey, as whatever he tells me to do, I do it! I am his third puffle. It is fun to be able to do all sorts of tricks with balls. I am sorta jealous of Shadow still.

I am honored to have the name of Spongebob, it is SOOOOOOOOO close to my owner's name. I love it when Spongey takes me to the Book Room. I sit there and stare at the artistic quality of the art in there. If only I was there during the Festival of Snow.... so much art.....

What happenned to my other puffles?

Good question! During CP WWII, I barely went back to my igloo. I did go back very shortly at times to gather supplies at times. The longest time was when ACP breached a fort in my igloo. We had a short battle before taking it on to the Dojo, the Undergrouns, and the Snow Forts. Not many ACP soldiers were there, I was with some volunteers, so SPA's militia overpowered the ACP's small amount of soldiers. So, I was not able to help during the time. They ran away late February 2008. Now that ACP is falling, I can feed my puffles more.

Other pins to Book pin, even wheel.

Rockhopper Tracked for the 40th Time

Finally!!! After a while, I have tracked Rockhopper again! I saw him on North Pole, UK. We paraded a little bit when we mostly stood around and talked. I should thank that penguin for saying "ROCKHOPPER AT THE ICEBERG" Don't doubt those penguins all the time!

The oldest picture of me 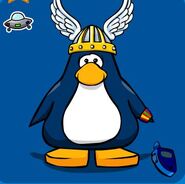 An awesome picture of Yours Truly ME!

My player card to go with the above picture 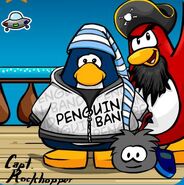 A photo of me and my puffle, Shadow 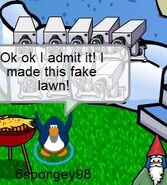 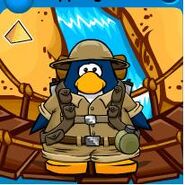 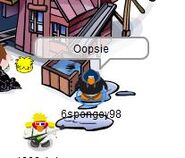 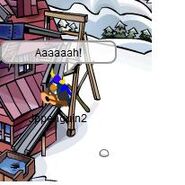 Scary! Hey, you would get scared too!

Is he going to die or fly?

Which way?
Smackthat.PNG
Smack That!
Add a photo to this gallery

My native language is English, because I was born in the USA. I also speak a little french and german :)

The Return of 6spongey98

Hi guys! Im back! I quit the wiki and I might quit it again. I just need to see who here actually misses me! So, yes, Polo890 is trying to get me back and i decided "Well I should give it a shot!"

Retrieved from "https://clubpenguin.fandom.com/wiki/User:6spongey98?oldid=1668966"
Community content is available under CC-BY-SA unless otherwise noted.