View source
You have new massages (you wish)
Check out the story Sharkbate and I wrote here!
See my computer art studio here!

Yo! I'm Barkjon! (a.k.a. BJ or Bark) I'm a bureaucrat on this wiki. I am a master Card-Jitsu player, surfer, and Cart Surfer. I think Club Penguin rocks, and I play almost everyday. I am a member in Club Penguin. On February 4, 2008, along with TurtleShroom, I was made a webmaster here by Robbsi, the old one. I'm 727 days old as of May 6, 2009. I have every pin starting with the first ruby and ending with the newest one.

See you in Club Penguin!

He was the first user to welcome me here, made me a sysop, is always ready to forgive me, and is a great friend to me!

He's really really nice, smart, funny, totally cool, and a loyal friend. Sure, we've gotten in a fight before, but we forgave each other. He rocks!

My alternate account is Barkjonaa, for use only when I can't remember my password or I remember it but it doesn't work.

I love puffles. Here are mine:

Here's my puffle's bio's, from their point of view.

My igloo is strange... its part music/rock, part puffle place, part living place. Click on picture to see it bigger.

Friends on the wiki

Barkjon the penguin was born on an island far away from Club Penguin. His hobbies were drumming and surfing. 7 or 8 months ago, Barkjon went with one of his friends on a surfing expedition. Sadly, Barkjon and his friend almost got drowned when a huge wave went over them. Barkjon almost drowned, but he saw his surfboard come up from the water and he grabbed onto it and fell asleep. When he woke up, he was at the Cove with a lifeguard. She said ,"There's a surf tournament starting soon. Wanna go?" Barkjon said yes. At the very end of the tournament, Barkjon and another surfer were coming into the finish line. Just a foot before The other surfer reached it, Barkjon jumped and made it! For a couple weeks, he was very famous. He and his red puffle, Skippered, won other surf tournaments. Then one day, a storm came to Club Penguin. Because they were so worried, the other penguins forgot about Barkjon. Then one day, the news headline said,'Drummer Missing from Club Penguin Band!' Barkjon traveled all over to find the Band, and, when he found them, he asked them,"I heard your drummer is missing. Can I join?" They agreed, and a couple days later Barkjon played in his first show. After a couple of shows, G-Billy was found again and Barkjon had to leave the band. However, Barkjon still drums in his band, The Pengu's. If you want to hear him or his band play, go to the server Half Pipe from 4:00-4:30 PST. As well as playing instruments a bunch, he also works at the Coffee Shop, serving hot coffee and cocoa to customers. Years later, after Barkjon landed at Club Penguin, he heard rumors of this penguin, stealing surfboards from un-expecting surfers. So Barkjon went to check it out, it was his friend who was on a surf expedition with him. His friend went back to his igloo and they live a quiet life (except for drumming) at Barkjon's igloo with their puffles. On May 15, 2008, he got hired as a photographer for The Penguin Times. So all the pictures you see in there were taken by him. He is also a surfer for a Pro Surfing Team. In October of 2007, he started going to server Half Pipe the most.

Let's say, I edit any page that pops up on the recent changes list. But I love editing:

Some of my fake jobs include:

"Every word of God is flawless; He is a shield to those who take refuge in Him." -Proverbs 30:5 (The Holy Bible)

"For God so loved the world that He gave His only begotten Son, for who ever believes in Him shall not perish but have everlasting life." -John 3:16 (The Holy Bible) 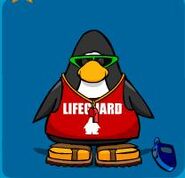 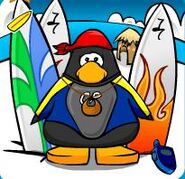 A VERY old picture of me.

A rare picture(I got it at 8:00,when I was supposed to be

My blue puffle, Azule Arrow(In honor of my friend, Bellieazul). 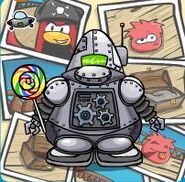 The lollipop is magically floating!

One of my favorite outfits.

My favorite outfit and the one you'll see me the most in.

A sailboat made by Sharkbate.