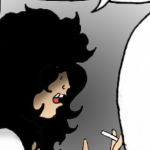 "A world ruled by scum will only give rise to more scum." - Eustass Kid, One Piece

"A wound that would kill an ordinary man..... I won't lose to it! In order to defeat one who is extraordinary, I can't allow myself to be ordinary!" - Roronoa Zoro, One Piece.

" Fools who don't respect the past are doomed to repeat it" - Nico Robin, One Piece

"Fear leads to anger. Anger leads to hatred. Hatred leads to suffering. Suffering leads to the Dark Side.""

"If you talk to God, you're religious. If God talks to you, you're psychotic."

“Mr. Moony presents his compliments to Professor Snape, and begs him to keep his abnormally large nose out of other people's business.''Mr. Prongs agrees with Mr. Moony, and would like to add that Professor Snape is an ugly git.
Mr. Padfoot would like to register his astonishment that an idiot like that ever became a professor.
Mr. Wormtail bids Professor Snape good day, and advises him to wash his hair, the slimeball.”

- The Marauders' Map, Harry Potter and the Prisoner of Azkaban.

"My friends cal me Meg. Atleast they would if I had any friends."

On Club Penguin, I'm Violetpiano. I made my account several years ago. I am a non-member currently.

Replace this section with some userboxes so people know more about you! You may find some key infoboxes here.

Retrieved from "https://clubpenguin.fandom.com/wiki/User:BellatrixTheMagicalPotato?oldid=1685245"
Community content is available under CC-BY-SA unless otherwise noted.