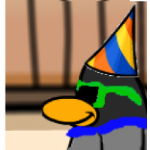 Bman2007Jazz (Sometimes shortened to Bman or Jazz for CP blocking reasons) is a rare penguin often found on the server Sleet. He joined Club Penguin on June 30th, 2008. He can be found during the hours of 12:00 PM - 11:50 PM EST, usually at the Dock with other rare penguins. He was once an Administrator and Bureaucrat of this wikipedia. He joined this wiki on April 12th, 2011.

He runs a blog about Club Penguin's news. (http://clubpenguindatabase.blogspot.com/) He has run this blog since early 2009. He had a website since he joined club penguin but was soon shut down because he forgot his admin password. So now he runs this blog.

He does his best to contribute to the CP wiki. He was promoted to Administrator on May 23rd, 2011, and to Bureaucrat on June 7th, 2011. He was demoted sometime later due to inactivity. Nowadays, he returns on occasion to fix grammatical and spelling errors within articles.

Bman is featured on the Wall of Fame!

The Pancake Dance is a dance created by Bman2007Jazz. It is almost impossible to do in real life.

Retrieved from "https://clubpenguin.fandom.com/wiki/User:Bman2007Jazz?oldid=1361222"
Community content is available under CC-BY-SA unless otherwise noted.