Club Penguin Wiki
Register
Don't have an account?
Sign In
Advertisement
in: Users that are NINJAS!!, Rockhopper Spotters, Band Spotters,
and 6 more

Hi my current penguin name is BJC695 but I still prefer the name Brendan7195 because that was my original penguin name. Sadly Brendan7195 got banned forever i tired my best to get him back but I could not. I go on any server and am currently a member so try to find me. I met one of my best friends in CP (Hat pop) when there was a moderator on. Seeing the moderator was almost like seeing Rockhopper. The mods name was Darkangel and had numbers at the end of the name (I forget what they were). Today Brendan7195 would probably be considered a rare penguin.

How I started playing Club Penguin

I started playing club penguin because I would always play games on this site called miniclip. On this site they just don’t stop advertizing Club Penguin. So finally I just wanted to see what’s so good about this game. At first I couldn’t find a Penguin name that wasn’t already taken. After that I got into the game and believe this I started playing the game in the middle of the APRIL FOOLS PARTY so I had no clue what was going on, I kept thinking "Wow this game is messed up!". My first item was the funny glasses, the first place I visited was the Dock and I though that his was the only room in the game. Anyway what I really hated was during the party I kept asking where the blue propeller hat is and no one would tell me. Then someone finally told me AFTER the party was over. After awhile of playing I thought that the game was stupid so I quit CP for a month or so. Then one day when I was board I played again. During Music Jam BJC695 was created as my test penguin. Awhile after that Brendan7195 got banned forever. Brendan7195 was a little over 500 days old. I was sad when he was banned because I lost some good friends. Now I use BJC695 as my current penguin and I think he's been banned twice (Only because he used to be my test penguin). One day I was bored on my computer and came across the CP wiki. Somehow I came across Hat Pop's page and that's how I became friends with most of you and became part of this Wiki!

My favorite band is the Red Hot Chili Peppers

One of My favorite video games is "The Legend of Zelda: Twilight Princess"

One of my favorite online games is line rider

My fastest time for solving rubiks magic is 8.39 seconds!

I can solve rubiks magic with my eyes closed

I live in New Jersey

My favorite TV shows are The Office, My Name is Earl, SNL, The Simpsons, and Futurama.

My favorite roller coaster is "Rolling Thunder" it is located at Six Flags: Great Advenure.

I've never broken a bone in my body.

The sports I play are Baseball, Golf, Cross Country & Ping-Pong (Table tennis) (if you consider that a sport)

My favorite movies that are NOT comedies are Iron man, Batman: The Dark Night And the Pirates of the Carribean Series.

I'll put a fact each week so keep comming back!

How many times have I...

This is where i saw how many times have i done a cerian thing THIS IS REAL LIFE NOT MADE UP and the year they happened (or i thing they happened).

How many times have you been seen on TV?- Twice once i visited a tv station for boy scouts (which i quit)and they showed us (2005 mabey im not sure) and another i was in NYC when the today show was still filming so i was seen in the backround (2008)

How many times have you been heard on the radio? Once boy scouts again we visited a radio station and they let us say our names (2002 mabey)

How many times have you seen a movie opening day? Three times dont remember the years they were

How many near death experiences have you had? More that I should have (over 5) years unknnown.

How many times have you bought a video game the 1st day it comes out? Three times

For making 100 edits on this wiki.

If you not listed write your name.

Black- I wear it sometimes but not alot

On March 7th 2009 I logged on to the server Icebound. Right when I entered the town I saw a red penguin quickly walk by when I saw that it was Rockhopper my mind went blank. I was so surprised that only three penguins were following him! He kept walking until he got to the cove. The whole way there he kept saying "HAR HAR HAR!". Once we got to the cove he started dancing everyone in the cove realized it was him right away. I didn’t like this that much because I was trying to get a photo of just me and him. Anyway after a few minutes of dancing he walked over to the benches by the fire and told us a story. After that we started dancing again. A few minutes later we plated "Rockhopper Says" we basically but up the type of emote that he told us to. Then he said that Yarr had an idea to have a race to the Migrator. Instead of trying to win the race I tried to get a picture of just me and him. It took him awhile to get to the Migrator. He actually made a wrong turn into the Pet Shop. Once we got to the Migrator we danced for a bit than he asked if asked everyone got the background. During all this about five of my buddies logged on and all came to the cove so if it wasent for me they wouldent have seen him! Soon after that he left. To see a bit of my memory I have a few pictures of it go down to Rockhopper Pictures.

Penguin Band- x5 (I saw them three times in one day!)

You get this award for being my buddy 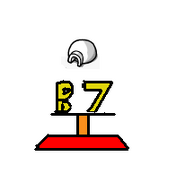 You get this award for winning the Penguin Challenge

To get my penguin challenge you must do beat me in all of the multiplayer games in Club Penguin without losing any games. When you want to take the challenge tell me. Good Luck!

All that remains of Brendan7195 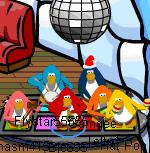 Hat Pop is taken down!

Me and U Fried

Me and Rockhopper walking

Me and Rockhopper on a bench

Me staring at Rockhopper