IM NOT MAKING MORE PARTIES ANYMORE BECAUSE THEY ARE EITHER INTERRUPTED BY SOMETHING IN REAL LIFE OR NO ONE COMES.

GO TO User:Childpengu1/Videos FOR WATCHING CLUBPENGUIN MUSIC VIDEOS AND "THE STINKY FAME" WITH ITS FIRST SONG: "I WANNA JUST DANCE"!

I need support on this!

I joined Club Penguin in October 2007. I joined it few hours after my cousin (he doesn't logs in now). If I joined CP some days before I could have been on the 2nd Anniversary Party. My first party was the Halloween Party. My first pin is the UFO pin, which I love!!!

Absences in the game

I was not able to be in the 2008 Fall Fair party, as my computer was being repaired. Also in the CPIP, I wasnt able to log in as the same reason told. I was so sad because I couldn't have the Red Construction Hat nor be a puffle...

Childpengu1 has 700+ days and he hangs out at the server Chinook!

Childpengu1 also speaks Spanish! so if someone wants a translate or something.. call me! lol (seriously i speak spanish)

Here are the names of my puffles:

Well, my life is just normal... I like to go to parties! Sometimes I get crazy and do random things (BTW, when I do that some people say im a freak, but I dont hear them...). The last random thing I did was with the classroom's board: I told one of my friends to draw things around me while I was in front of the board, so it looked wierd. He drew a puffle in my head, and a gun in my hand. Was kinda funny cuz the gun seemed like a candycane, and the puffle was wierd.

Here are some of my phobias!

Photos from Real Life (only objects)

I'm not gonna post myself in photos! I will post things from me, but not people, pets nor other living thing.

Mighty Beanz. Oh Yeah! This is one of the many mighty beanz I have: although I bought it in 2006, it seems almost new!

The Eiffel Tower. This is when I went to my trip to Paris. Just kidding! I took it from a website which I cannot tell. If you message my via my talk, I could tell you...

A photo of a page of the book: Captain Underpants and the Wrath of the Wicked Wedgie Woman. I love that book, it is so hilarious (And Dav Pilkey: the writer, is funny also!)

Hearing one of my favorite songs on my now stolen ipod.

Favorite books, videogames and anything more! 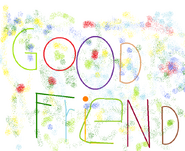 Merbat's award for being a good friend!

For going to Brook's Party! 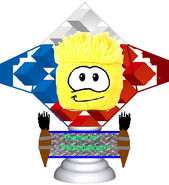 For participating in Patzi's Artistic contest! 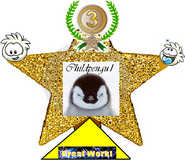 For being HHS's friend!

For being one of HHS's best friends (I know im not her bestest friend)!

I am a Rollback

I am a Fire Ninja!

I wanna be a Water Ninja!

I wanna be a Snow Ninja!

(If you want to be one plz write here)

Pages I want to create

I'll try to put every photo i found with Childpengu1!

I made this drawing! DJ K-Dance!

Childpengu1 jamming with the Penguin Band

A drawing made by me

Hal Homsar Solo and me (made by me)

On the New Year's Party. The section of "Take a photo with Santa".

Add this award to your userpage if you like.

Cross your eyes. After the 2 pictures become 1, you will see a 3D picture.

At HHS Group Photo party. It was not an epic fail!

I've done some awards, and I give them to people I know that deserve that award.

My award for a friendly user.

My award for a worthy user.

My award for a user that ROCKS!

My award for a trustworthy user.

Thanks for watching Childpengu1's User Page! Click here for your prize!

I need support on this!