These parties are from Childpengu1 and you can comment anything on the Talk, but don't change this page!.. Thanks! 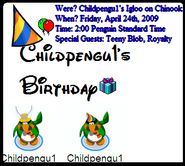 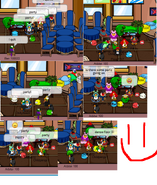 The invitation for my 2nd Bday Party on CP!
Add a photo to this gallery

The videos will be back soon, while they return, go to my Youtube channel.

For The Penguin Oscars 2010

If you sign up here, you will be notified one day before the party.

EMAIL SENT BY CP TO CHILDPENGU1:

Retrieved from "https://clubpenguin.fandom.com/wiki/User:Childpengu1/Parties?oldid=1658796"
Community content is available under CC-BY-SA unless otherwise noted.