My page on the Club Penguin Fanon Wiki.

I started REAL early on Bulbapedia. If any other peoples edit that wiki, tell me on my talk page on HERE, not Bulbapedia.

I was born on a very distant island called Alugasaurialako Island, an island undiscovered to be on maps. My mother penguin's name was Fibobialachu38, father penguin's name was Ghacolapwak295. They were later renamed, mother penguin's name Fabolous951, father penguin's name Funter3 when we crash landed on Club Penguin. My name was Molaconimaku486, but later named Flystar55555. How did we crash on CP? We used some of our undiscovered technology, and the gadgets went out of control and exploded. We flew thousands of miles across the world and landed in the ocean near some land, and that land was Club Penguin. When we got to the land, all the creatures were mainly the same species as us, penguins, and the others looked like colored puffballs with eyes, puffles. I even saw a shadow of a mutated crab! We talked to some of the locals of CP, and they called some people to build us an igloo and give us free food, water, and supplies we needed. They even gave us a Blue puffle we named Alugasaur to remind us of the island. Then I made some friends like Arceus493 and Bambi409.(And when I turned 12, the year after we crashed landed, I got a Yellow puffle of my own named Molacon to remind me of my old name. And that's the same year my mom had another baby we named Star756. When she turned 12 she got a Purple puffle she named Ialako to remind us the other part of the island's name.)

I go on the server Yeti most of the time. If it's full, I go on a random server, usually Sherbet, but I go on any server randomly.

I own a Number!

I named all my puffles from natural elements (Water,Fire etc.),except my Purple and Pink puffles. And my non-member puffles have -er at the end,while my member ones have -y at the end. All my puffles have been trained to do a ninja move, except Sunny, who ran away before ninjas existed.

My Buddies On Club Penguin

Some of my looks

Hairdo: Firestriker, Messiness (looks like my hair in real life)

I am the other inventor for the Top Agents (other one Agent D). Here are some of my inventions:

What's my couch doing on fire? Oh well, better get the fire extinguisher.

Oopsi, I inverted the colors. 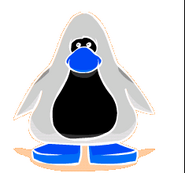 Oopsi, I inverted the colors to this too.

Why is there two of you? Seriously!

Why can't I get this yet! 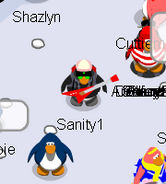 What's this fattie doing on my page?!! Vandalize him now!!!! Me as a beta tester!

Proof that I saw Cadence!

Me in my standard outfit.

Me in my standard outfit. (that previous one was just a scratch) 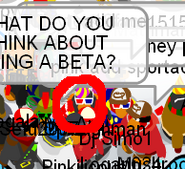 I spent ALL my time on Ice Fishing today (January 31st, 2009) just making this image. (not an edit)
Add a photo to this gallery

This is my personal Wall of Fame (kind of)! The members of the High Council are:

Who do you think should be the POTM?

What do you think of Rbfskywalker's laws?

Rbfskywalker, you are not allowed to vote in this poll. Votes end January 4th, 2009.

How much do YOU know about Club Penguin?

How many yearbooks are there?

Which of the following are famous and waddle around Club Penguin?

Rockhopper's Ship: False, it's called the Migrator, not the Migorator

What is about 3 times the square root of pi?

Top Users number of edits compared to mine

Mine:
Retrieved from "https://clubpenguin.fandom.com/wiki/User:Flystar55555?oldid=1657076"
Community content is available under CC-BY-SA unless otherwise noted.