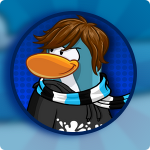 Froggyfrog8 does not have a Club Penguin Island counterpart.

Froggyfrog8 is a Comm student for the EPF. He is a light blue penguin wearing The Side Swept, a Blue Striped Scarf (ID 3012), a Custom Hoodie, and Blue Checkered Shoes.

He was a special guest for various "Twitter Parties", where penguins with Twitter hold parties/contests, and invites other user to join. He was very common to be seen at the Halloween Party 2013, The Fair 2012, The Fair 2014, the School & Skate Party, and The Fair 2015.

Froggyfrog8 was one of the first penguins to get into the PSA. Alike his friend Rookie, he is too a silly, compassionate penguin. He has been dreaming to be an actor, and has auditioned many times to preform at "The Stage". Being an actor has developed his dramatic, and extroverted personality. In Operation: Blackout, Rookie and other various EPF agents have been captured, and it was Froggyfrog8's job to save them all.

Retrieved from "https://clubpenguin.fandom.com/wiki/User:Froggyfrog8?oldid=1868277"
Community content is available under CC-BY-SA unless otherwise noted.