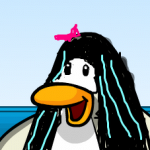 Hello all! I am Hey, Puffle Dude (but you can call me Puffle Dude). I love random pictures, memes, and captioned photos, and I will quite often post them on the wiki! (Don't worry-on my page only :P) If you sent me one of those it would make my day!

My penguin was created around 2007. I had lots of fun playing with her. My friend created a CP account and we had lots of fun pretend-tipping the iceberg, playing spies, and playing Puffle School. Having discovered Sims 3 and other video games, my friend and I moved off CP and found other things. I came back December 2012 for a brief period of time. I went on every few months, taking care of my puffles and my friend's. For Christmas 2012 I had gotten a membership, and I instantly used it. I joined the wiki in 2013 and that rekindled my love of CP. I was on every day again, exploring the revamped island. From August 2013 to early January, I was off the wiki and CP. On January 25, 2014, I decided to try and be a more active user on both the wiki and Club Penguin.

Retrieved from "https://clubpenguin.fandom.com/wiki/User:Hey,_Puffle_Dude!?oldid=1356885"
Community content is available under CC-BY-SA unless otherwise noted.