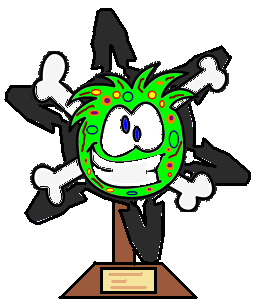 Iamred first began Club Penguin in January 2009, when the Fiesta was going on! All I can remember is Golden Steps outside the NightClub, and the Taco Pin and the free item was in the Forest (I think) and it was a Mini Sombrero. The in Febuary 2009 the first ever Puffle Party was here! I was so exited! I saw a White Puffle! And the Free Item was in the Cove! Talking of the Cove, sometimes I pretended to be "Keeper of the Cove", I still do sometimes. It was a Puffle Bandana. Then some in March or April I accidently banned my penguin one too many times! Oh No! I e-mailed Club Penguin on the problem, but they didn't unban Iamred. I had to make another penguin! So I made Iamred777, and didn't use him for 5 days, then I logged in him, when to the Dojo Courtyard and got the Tree Pin. After many failures and attemps I finally became a Ninja, sometime in the summer. I went to the Ninja Hideout, and tried to buy stuff from the Martial Artworks catalogue, but I couldn't I needed to be a member! Then on a hot sunny day me and friend went out to buy a 1 Month Club Penguin membership, the first shop we knew had memberships we went in (ASDA). I picked up the Membership Card and went to pay. NO! I only had £3.10, and the membership cost £3.95. How bad. A couple of days later I saw my friend at the Stage on Club Penguin and he was a member! I was so annoyed. He had the Blue Viking Helmet! Also he is rare so I was more annoyed (he has the Lighthouse Shirt, no not from the Treasure Book). So I decided to become a normal citizen. Then in November 2009, a new room came the Fire Dojo! I was a Ninja so I thought I could get in! Wrong! It was for members. Another member thing. Then at the Holidays Party 2009, there was only one free item! The first Christmas/Holiday Party with only one, but in a way the Mystery Present could have been one. Then on December 30, 2009 a friend gave me a Card-Jitsu code! It unlocked the 2 Fire Camera Card, 3 Water Water Balloon card, 5 Water Chocolate Pizza card and a Power Card the 9 Ice Xtreme-JetPack-Surfer card! Also on 30 December, 2009 I was in a war, well not a war more like an invasion! The ACP (Army of Club Penguin) was at the Snow Forts on the Server Snow Forts for a end of decade tournament! On 31 December, 2009 I was waiting for the New Year! In 2010 I started a new Club Penguin life... January and Febuary were uneventful really (to me). I was so annoyed the the St. Patricks Day Party AND the Winter Fiesta parties didn't run in 2010. GRRRR. xat help me with Club Penguin as I found new friends and stuff. Then around April/June I unlocked two more Card-Jitsu codes (this time from people on xat).

Pages created by me!

Retrieved from "https://clubpenguin.fandom.com/wiki/User:Iamred1?oldid=429803"
Community content is available under CC-BY-SA unless otherwise noted.