Jackninja5, also known as The Man Who Invented Cool, is a penguin on Club Penguin. There are 1,921,329 edits on this wiki.

Anyone who meets me on Club Penguin shall put this template on their user page:

On my first days, I was n00bish and dumb and often got kicks from Chat! But soon, thanks to admins and chat mods, I learn my lesson and learn more about the rules and now I try to teach people not to do my mistakes! I try to remove all spam and vandalism here. I also try to get high quality pics here! I am now currently a chat moderator and rollback :D

In 2008, I was a non-playable penguin which could never be met. I was yellow. I was a secret EPF agent. Only Dot knew about me. As the years went by I never really used my spy phone. That was stupid of me. I could not stop the earthquake as it took a year for me to waddle back to the HQ. So it got fixed by some agent. I had failed a lot but in 2010, I made the biggest mistake ever. I refused to use my spy phone to escape from the wardrobe and then I got blasted off the island. Luckily I landed on an abandoned iceberg but I nearly felt like dying. Then some construction workers who wanted to tip the iceberg found me and got me to a hospital hidden in the island and I needed a new colour of skin. I chose dark green for a new life. I am now very responsible and use my spy phone more often. So I became a meetable penguin on Club Penguin after the explosion a few months later. In 2011, I became a Jester and I was seen often on Club Penguin. In October 27 2012, I got killed by an axe in the mansion but I can be seen as a ghost. On November 17 2012, I resurrected from the dead and due to my injuries being seriously bad I was now a crab. I found out that Herbert took over Club Penguin and fought him. I shut down many computers and my home had been destroyed with only me and my puffles there. As the puffles try reconstructing my house, I turned off all the computers. After destroying the fifth computer, I got captured by Herbert and put in a cage with the crabs. Someone else saved me and I finally defeated Herbert by destroying the last computer and saving the fellow agents. I was shocked to see Aunt Arctic as the Director. My house was restored and I began changing back to a penguin.

Prince Jackninja5 (Me as a Prince obviously)

Me (or some other dark green penguin) doing the Test Run.

JackJackers (Me as a Super Hero) 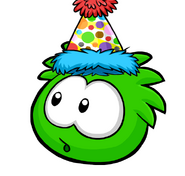 Add your name here if you are Jackninja5's friend! And then upload the version with your name on it! 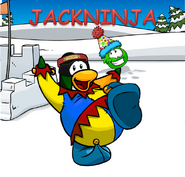 Jackninja5's player card while he was singing his song 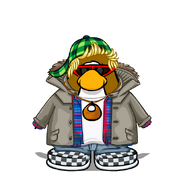 I see the Migrator

Me killed on Halloween

Me doing graffiti on Herbert's statue