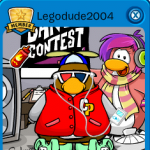 Legodude2004 is a rare penguin, Tour Guide, and an Elite Penguin Force Agent. He joined in August of 2011, and soon became a Club Penguin enthusiast. He collected plushies, toys, and Club Penguin Trading Cards, meanwhile getting swag with the coin codes.

Role in the PSA

Ever since he was born, he always suspected something was up. He'd always see shady looking penguins with blue flip-phones looking shady and doing shady stuff. He decided to investigate. Lego set out on a journey to figure out what was happening. While doing his research, he stumbled into a weird place. It was a large room with grey walls, which forced him to take a test. He passed, and was taken to the PSA headquarters. An odd blue penguin, revealing himself to be Gary, welcomed him and tasked him with a mission. He needed to find Aunt Arctic's missing puffles. He eventually completed the task, with many thanks and rewards, and moved on to the next task. He did everything they wanted him to do, and eventually worked himself up to a high rank. In many of his missions, he worked with a puffle named Flare. When he became a leader, he received a whistle to call Flare in if he ever needed him. Later, the PSA was disbanded when Herbert planted popcorn bombs and blew up the HQ.

Involvement in the EPF

Lego is an honorary member of the EPF, since the PSA data was transferred to the EPF and Lego was a high ranking member. When the EPF needed help, he was always there for them.

Retrieved from "https://clubpenguin.fandom.com/wiki/User:KOALALEADE?oldid=1755477"
Community content is available under CC-BY-SA unless otherwise noted.