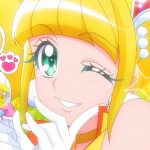 OH NOES, ANYTHING BUT THAT NUMBER!! >:O

Best quote from him, ever.

Holy cake! One of my blogs is on the "Popular blog posts" YEY! :D 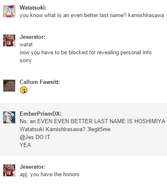 One of those epic moments on chat.

On March 5th 2015, the great Technini accidentally spammed a URL while he was trying to post something! :O

Then, here are the other user's reactions.

After that, the great Technini got kicked! NOTE:THE BANHAMMER MEANS NOTHING 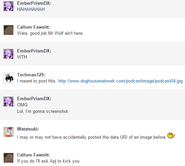 And, NOW that's what Tech meant to post. THE END!

HOLY PARROTTI
Add a photo to this gallery

Retrieved from "https://clubpenguin.fandom.com/wiki/User:Krystalite?oldid=1900374"
Community content is available under CC-BY-SA unless otherwise noted.