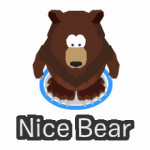 Nice Bear is a Brown Bear that first appeared during the Puffle Party 2014 in April 2014. Before coming to the island Nice Bear lived on one of the Three Little Islands. Nice bear can be spotted at the Forest and can be seen poking around in the woods.

Nice Bear is friendly non aggressive bear with a gentle and kind mind. Although he's not smart he makes up for it by being playful and adorable.

Nice Bear lived on one of the Three Little Islands until the day when Rockhopper came to visit. Nice Bear was curious and snuck on to The Migrator. When Rockhopper noticed that he had a bear on his ship it was too late to take him back the his island so he dropped him off at Club Penguin Island when he unveiled the new Orange Tabby Cat and Blue Border Collie puffles. He was afraid that the penguins would think hes associated with Herbert P. Bear so he keeped it a secret and used the new puffles as a distraction. 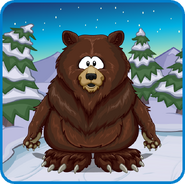 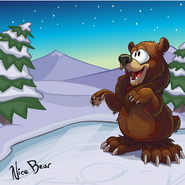 Signature
Add a photo to this gallery

Retrieved from "https://clubpenguin.fandom.com/wiki/User:Nice_Bear?oldid=1573226"
Community content is available under CC-BY-SA unless otherwise noted.