I created this penguin on the 31st of August 2005! It has been my main penguin from January 2006 to November 2011. I decided to quit using this penguin because it has been hacked and is now currently banned forever. It is now considered as one of the rarest accounts on Club Penguin as it has a Party Hat. This penguin is expected to be unbanned later in the future but right now, I have moved to my secondary account, 300th. If Nintendo 300 is unbanned in the future, this account will be sharing the title as my main account with 300th :P.

I have a LOT of favourite items that I have on my penguins! Here is the list:

Here are the items I want. I missed most of them because I had quit Club Penguin for some time:

And all pins from the Shamrock Pin to the Hot Chocolate Pin .

If you have any of those items, I'm so jealous... Especially the Alien Antennae . 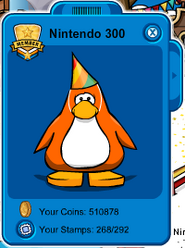 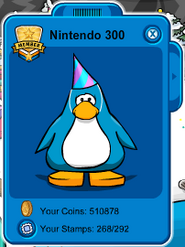 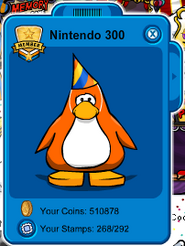 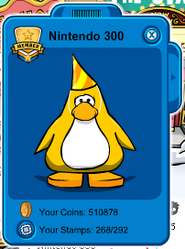 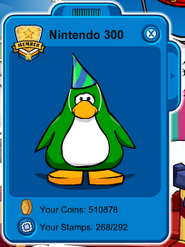 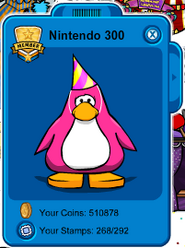 Me wearing the Party Hat !