Was celebrated for mentioning the Club Penguin Wiki's 5th Anniversary! The party was cool! the bad nes were that some went before the ending, and others couldnt come at all :( But we will be more careful next time picking the party's time!

Mixer and i were performing at stage

Having a meal at Pizza Parlor 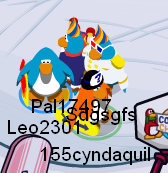 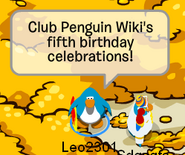 Mixer2301 introducing the party in Lighthouse.
Add a photo to this gallery
Retrieved from "https://clubpenguin.fandom.com/wiki/User:Penguin-Pal/Party?oldid=519380"
Community content is available under CC-BY-SA unless otherwise noted.