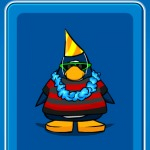 Saying Goodbye to the old Gift Shop and Pizza Parlor! Thank you to my friend Luigispanish for making this!

Saying goodbye to the old Dojo. Thank you to my friend Luigispanish for making this!

Saying farewell to the Ninja Hideout and old Dojo Courtyard. Thank you to my friend Luigispanish for making this!

My final moment in the old Dojo. This picture was taken just minutes before it was renovated.

A custom of my penguin made by Mariocart25Charizard.

This is so awesome and so true.

A cool comic made by my friend Fuzzy.
Add a photo to this gallery

October 2012: What party would you return too?
Winner: Summer Kickoff Party 2007

February 2013: What will you miss about Billybob?
Winner: His AWESOMENESS!!!

March 2013: What discontinued party would you like back?
Winner: Water Party

June-September 2013: Sponsored parties. Like or hate them?
Winner: I hate them!

November 2013: Most challenging mini-game?
Winner: Aqua Grabber
Add a photo to this gallery
Retrieved from "https://clubpenguin.fandom.com/wiki/User:Shurow?oldid=1700512"
Community content is available under CC-BY-SA unless otherwise noted.