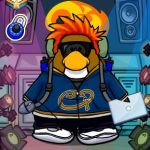 Yes, it's me, and I'm here to celebrate the CARD-JITSU PARTY, WOOT WOOT AND HIYAH!!! I'm a party clown, and don't say "I don't know, but there's one on your shoulder when it's TIME TO TRAIN FOR CJ-SNOW!" Hahahahahahahhaa! I'm hilarious! (Sarcasm, sarcasm . . . . )

Jjoeyxx is a penguin who goes on Club Penguin every day and likes to celebrate the Card-Jitsu Snow things by having fun with the elements, battling other ninjas, training in kendo, helping the EPF and EATING LOADS OF FOTTY'S SUSHI AND SASHUMI LOL!!! Also, he likes to go running about like a headless chicken idiot/lunatic!!! :D His igloo has a giant garden with a shiny car, a patio, a kitchen, a bedroom, an office, a hallway area, a living area, a lounge, a garden pool, a live concert in his front garden, a barbecue outside, free snacks outside and a private entrance to Monsters University!!! He is an expert on CP! He joined on July 17th 2008. GO NINJAS!!! (pronounced Ser Jay-jo-ee-ex-ex)

Favourite Stage Play: Battle of the Ancient Shadows because it's so action-packed and fun! :D

Favourite Mascot: PH because she is nice, sweet and loves puffles! And Aussie!

Team: Blue Team because we rock!

Ninja Status: Everything so far, and waiting for C-J Snow in May!

Date of birth: May 13th - work out the year using the above info^^^

Retrieved from "https://clubpenguin.fandom.com/wiki/User:Sir_Jjoeyxx?oldid=1836674"
Community content is available under CC-BY-SA unless otherwise noted.