I'm With Stupid is BACK AT IT AGAIN with its 18th edition!

I'm With Stupid 18 is particularly special because it is the FIRST season to be done in two formats. It is also the first to feature LIVE ACTION CHARACTERS! Produced with pens, sharpies, index cards, notebook paper, and Autodesk Sketchbook, I'm With Stupid 18 is completely different from anything we've seen before. 16 of the last 17 editions were done in Adobe Flash/Animate with IWS16 being produced in MS Paint.

Without further ado, let's jump right into it! 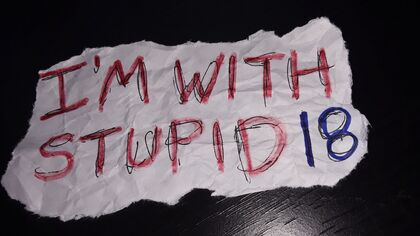 You know the drill. Top row to bottom row. Left to right. LET'S GET IWS18 STARTED! 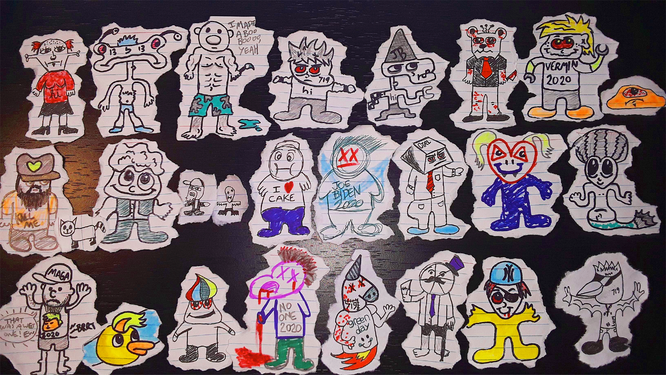 ROW ONE: Butch's Wife Who is Named Trevor, Pangaea-Sexual, Carl Rogerson, Genera-Lad, Mayheblow, 1842 and so on, X Æ A-58 Tusk, and Orangelump.

That was exciting! We're not done quite yet. Stick around because we've got more RIGHT AFTER THIS!

Welcome back to I'm With Stupid! We last did this segment in Season 10 for the one year anniversary of I'm With Stupid's birth. Now that it's been a bit longer, we want to check in on some other characters again! Let's see what they've been up to.

-Crumblebob of Season 12 and Dumaker of Season 8 started selling face masks, hand sanitizer, and grenades during the 2019-20 coronavirus outbreak.

-Yellowlump of Season 2 resigned from Hinkonton City Council in late 2019 after fighting while drunk at Buddy’s house.

-iobxut of Season 14 was resurrected and had his skull and brain reconstructed. He then went back in time to early 2017 after changing his name to Tuxboi.

-SalTI of Season 5 was charged with stalking and sexual harassment in early 2020. His current whereabouts are unknown, but he likely still has salt in his eyes.

-Tonamalos of I’m With Stupid: The Movie was arrested for sneaking into a Buffalo Bills game without a ticket. This was bad luck to the Bills as the Philadelphia Eagles beat them 31-13 in that game.

-Carly of Season 2 was killed in a skydiving accident.

-Buddy of Season 1 and Rico Lareby of IWS17 have been dating since September 17, 2018. Buddy arranged her appearance in I’m With Stupid.

-After abolishing Nazi Germany in 1943, Buzz of Season 1 time traveled to 2001 and formed the band My Chemical Romance, but he was then fired by the rest of the band three days later when they realized Buzz was the only talented member of the group.

-Lollapaloafers Inc., the company founded by Jimothy Jimson and Bwesnessman of Season 7, went bankrupt after the demand for loafers dropped to 0% in October 2018. They are now working as janitors at P.F. Chang’s.

-Jeffin Yakiflex of IWS16 has filed to run for President of the United States in 2036. He will be running as a member of the U.S. Marijuana Party.

-Margitiss of Season 9 killed himself in his Buenos Aires condo.

-Oscar of Season 7, Olivia of Season 11, and Ophelia of IWS17 have begun searching for their long lost parents.

-whatareyoulaughingat of Season 13 is still fighting an infection he received in October 2019 from licking a big ol pile of doodoo.

-Steyer Mugabe of Season 13 was diagnosed with PTSD from being placed in the wrong season. She was expecting to appear in Season 12 but the producers put her in the wrong waiting room.

-Fewgrahl of the pre-Season 12 event is still laughing because he was ahead of everyone on the medical glove trend.

-Krispy of I’m With Stupid: The Movie is still alive, despite being quite moldy these days.

The I’m With Stupid Chat Room

All of the I’m With Stupid characters have a chat room to stay connected. Let’s have a look at what’s going on in there today!

[Soomu] you think you had it bad? i had to stand next to tht t-box dude for the all star pic

<The Nuker entered the chat>

[The Nuker] Hey, just here to remind you I was in season 10

<The Nuker left the chat>

[Buddy] I think it’s the radiation in his head

[Buddy] YO ARMBAND GUY WHATS UP

Unfortunately, all good things must come to an end. Dr. Seuss once said, don't cry because it's over. Smile because it happened. What a beautiful celebration here tonight. 18 editions of I'm With Stupid plus the movie are in the books. We're not done yet!

There are now around 776 characters in the I'm With Stupid universe.

Thank you so much for tuning in, and I hope to see you again soon! Goodnight.

Retrieved from "https://clubpenguin.fandom.com/wiki/User_blog:-TwinkieReborn-/I%27m_With_Stupid_18?oldid=1905120"
Community content is available under CC-BY-SA unless otherwise noted.